In a village in Ashigara, there is sumo spirit who they call "Sumo Boy" who is usually asleep but loves to wrestle when he wakes up, especially with children and other wrestlers. He is the son of a wood cutter who loves wrestling who would win in every competition the village held. Eventually, they had enough and decided to toss him off a cliff, and therefore he became the monster Jihibikiran. It is said that after winning 100 matches, he will go back to sleep for 10-20 years, but, if angered, he will revert into his monstrous form. One day, the children of that village decided to call out to him, but with no answer.

While two thieves are robbing from a sumo wrestling, the wrestlers inside brought out a snorer but that wrestler knocked off a ball from a statue rolled off and it woke up Jihibikiran in his human disguise and proceed to beat every sumo wrestler in that house in wrestling with ease. The two thieves took advantage of Sumo Kid and convinced him to go to the city with them in exchange for food on the belief that there were stronger wrestlers there. The wrestler was confronted by Takeshi Yamato of UGM who challenged him to wrestle and kept losing to him but refused to give up until the two thieves knocked him and Emi Jouno, convincing him that they were bad guys. He then proceeded to participate in a sumo competition and the thieves made off with the kid when UGM confronted them but got threatened by them and tied up.

The plan then was to wrestle a rich guy to get access to his safe with gold bars. The kid climbed up to get over the fence, little did he know that it was an electric fence. The Sumo Kid ran off and turned into Jihibikiran going on a rampage through the city until Yamato challenged him to one more round of sumo, only this time, as Ultraman 80. The monster accepted, Yamato transformed into the Ultra, and the fair and square match commenced. After a couple of slip ups, including letting a building get destroyed by the monster, 80 managed to hold his own against the judo monster, and beat him by lifting him as high as he can and throwing him. Jihibikiran reverted back to his Sumo Kid disguise, was given a boxed lunch, and returned back to the mountains where he came from. 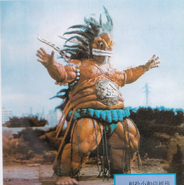 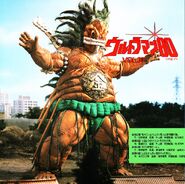 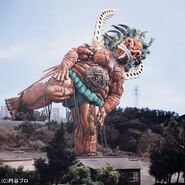