Twitter
Youtube
Ameblo
Jenya (ジェーニャ, Jenya) is a singer and voice actress. She originally works under 81 Produce from 2010 until September 2014. A Russian herself, her real name is Yevgeniya Davidyuk/Евгения Давидюк. She is a fan of Sailor Moon back in her age was 16 years old, thus becoming the inspiration to her career. 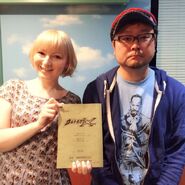