In Ultraman Ginga, an alternate continuity version of Jean-Nine/Killer was shown as one of the supporting characters, demonstrating the ability to transform into Jean-Star (ジャンスター Jan Stā).

After Beatstar captured Jean-Bot and Emerana in a giant sphere, Beatstar created the ultimate robot based on Jean-Bot, Jean-Killer. The rest of the team tried to help them before they were dragged in, but it was too late as the gate closed and it disappeared. The giant sphere appears in another dimension right when Hyuga and Rei were going to meet up with their ZAP SPACY team at Planet Buram for a vacation. As the giant sphere was heading to Planet Buram, Hyuga contacts Kumano to evacuate the population off the planet as fast as possible. Rei found entry through the damaged gate, in there they found Emerana and are attacked by Legionoid Beta, after Gomora defeated it Ace Killer, King Joe, and Inpelaizer appeared and defeated Gomora.

With arrival of Ultimate Force Zero as they defeated them, Beatstar sent Jean-Killer to fight Ultimate Force Zero and they were easily defeated, brainwashed and with red eyes Jean-Bot arrived and attacks Emerana, Rei and Hyuga, Rei tried to hold him off with Litra as Gomora hasn't healed from the damage, with Litra defeated and Jean-Bot was going to kill Litra, Emerana stands before Jean-Bot then orders him to stop as Jean-Bot held his attack and Jean-Killer also heard her voice and stopped attacking Ultimate Force Zero then paid attention at Emerana and his eye began to turn from red to yellow but it stop turning at all as it is the moment that Glenfire attacks him again.

After Ultraman Zero takes him far away and followed by Glenfire and Mirror Knight, Jean-Bot began to regain his consciousness but he had to shut down his system to resist Beatstar's control. Jean-Bot told Emerana, Rei and Hyuga about everything he knows about Beatstar and Jean-Killer, Hyuga told Emerana that when she ordered Jean-Bot to stop, Jean-Killer also noticed and stopped as well. Emerana begins to think that Jean-Killer also has a heart like Jean-Bot as he was based on him and that makes Jean-Killer as Jean-Bot's younger brother. They started to repair Jean-Bot with help of Kumano's knowledge. As the fighting with Zero continues, before Zero had a chance to defeat Jean-Killer, Jean-Bot stops Zero in time and tells everyone that he is his brother, the rest of the team is surprised when Jean-Bot try to persuade Jean-Killer that living life forms is the not enemy, as he still under the control of Beatstar he continued to attack Jean-Bot and the team.

Emerana arrives and persuades him to open his heart to the truth to make up his own mind, he responds but Beatstar forcefully gains control of him again and he attacks Emerana with beams from his eyes and holds back the team with electric blasts to make them stay where they are, even how much Rei tried to stop her, Hyuga told Rei that they should trust her. She still tries to convince Jean-Killer as she believes that Jean-Killer has a heart as his attack missed countless times at Emerana. He stopped after he saw Emerana's tear, the team is freed and everyone is surprised when they see Jean-Killer's tears. Everyone taught him about life, heart and the truth about organic lifeforms not being his enemy. Jean-Killer had make up his own mind but Hyuga reminds everyone that is time growing short before the sphere will hit the planet, the team and Jean-Killer destroyed all surrounding Legionoids. Ultraman, Ultraseven, and Zoffy arrive to buy them time before the sphere hits the planet. Jean-Bot begged Jean-Killer to reveal Beatstar's location. Jean-Killer told them that he's on a half-cut moon. The team jump up to the moon and found several of King Joes and Inpelaizers. Jean-Bot, Glenfire, Mirror Knight and Rei summoned Gomora to hold them for Zero, so Zero will be able to stop Beatstar.

After everything is over, Jean-Killer had been renamed by Emerana as "Jean-Nine" and Zero had him joined the team as well. Emerana told Jean-Bot to be a good big brother to him. After Ultraman, Ultraseven and Zoffy left to Land of Light, Ultimate Force Zero is ready to save universe again. Ultraman Zero Gaiden: Killer the Beatstar

Like the rest of Ultimate Force Zero, Jean-Nine waited for Zero to finish his training in the Monster Graveyard. After Zero's adventure, he and the rest of the team greeted the Ultra and made their way back to the living dimension. A New Power

While Zero was being attacked by the Darkness Five (save Jatar and Sly) and Tyrant, Jean-Nine joined Ultimate Force Zero to hold them off while Zero went to rescue Pigmon. Jean-Nine fought Villainous and Tyrant with his brother. After Zero was possessed by Belial and became Zero Darkness , Jean-Nine gives the evil hero a greeting. However, Jean-Bot senses that Zero was becoming evil and pushed away Jean-Nine from Zero Darkness' Deathcium Shot. Unfortunately, it causes Jean-Bot to become heavily damaged and passed away.

Seeing his brother "die", Jean-Nine runs amok. This also become more when Zero Darkness killed Mirror Knight. Jean-Nine then starts attacking Zero Darkness. However, all of his attacks are easily dodged by Zero Darkness. Even Zero Darkness causes heavy damage by just pushing Jean-Nine. With Jean-Nine tired of the battle, Zero Darkness finishes the battle using Dark Zero Twin Shoot. The attack also heavily damaged Jean-Nine and he meets the same fate like his brother. While Ultraman Zero fells into submission, members of Ultimate Force Zero gives several encouragements to him before departing to the afterlife. He was later revived when Zero reversed the time flow and along with other members, escorted his exhausted body. Awakening of Zero

Prior to the series, an alternate Jean-Nine participated in the Dark Spark War and join forces with all the Ultras and their allies against the evil side. During the battles, Dark Lugiel, the mastermind behind this War turned all the participants into Spark Dolls. Just as the battle is about to end an unknown Ultra warrior appeared and fought Dark Lugiel but, just like all the participant of the Dark Spark War this warrior also turned into a Spark Doll. Jean-Nine retains several bits of his sentience but the Spark Doll ended in Lugiel's possession and handed to Tomoya Ichijouji, alongside his own Dark Dummy Spark. As a result, Jean-Nine was turned into Jean-Killer.

Jean-Killer's Jean-Star form was used as Tomoya's base of operations as he kept the captured Taro in his bird cage. After mercilessly firing on Ginga (who recently calmed/purified Ragon) and served as a ploy in deceiving Hikaru, Jean-Killer fought Doragory and later on the Ultraman himself as they brought the entire battle on space. Tomoya's decision to save Hikaru ended up with Tiga Dark firing on its back. Jean-Killer was deactivated as Ginga crushed the Dark Dummy Spark in its cockpit, but Tomoya's will to befriend Hikaru and his declaration of beating Ginga with his own hands allows Jean-Nine to resurface as they assisted Hikaru/Ginga in defeating Tiga Dark and giant Alien Valky.

When Tomoya was among the people trapped in a space-time rift, he was somehow able to summon Jean-Nine as the robot teleported from the space. He was seen again supporting Ginga in a fight against Seiichiro Isurugi/Ultraseven Dark. In a fight against Super Grand King, Jean-Nine, Ultraman, Ultraseven, and Ultraman Tiga hold the monster long enough for Hikaru as Ginga tried to get Misuzu back to the good side. In the end all of them were heavily injured but the plan worked with Misuzu and Hikaru as Ginga defeated Super Grand King/Alien Nackle Gray and freeing their school from a space-time rift.

Jean-Nine's injuries from the previous battle made him unable to participate in a battle against Dark Lugiel. However, after Ginga defeated the tyrant, all of the Spark Dolls are presumed to have returned to their universe. A fully repaired Jean-Nine thanked Tomoya and departed with Ginga as he and all of his friends celebrated their victory. Your Future

In the middle of the Ultraman Ginga series, as soon as Ultraman Tiga was losing the battle, Jean-Nine came rushing in at Tyrant and came to help Tiga. A battle soon started again as the two fought the monster. Jean Nine launched his Jean Cannon at Tyrant, but then reacted by striking the robot's cannon and disabling it. while the monster pulled him in Tiga slashed at Tyrant and cut off his grappling hook. With the chance, Tiga took the hook and turned it into energy and threw it at the monster's chest and Jean-Nine used the Jean Stardust and blasted at Tyrant's chest destroying him and reverting the Spark Dolls back. Ultraman Ginga Theater Special: Ultra Monster ☆ Hero Battle Royale!

Jean-Nine first appears fighting against a group of Galactrons, alongside the Ultimate Force Zero. When Gillvalis targeted Geed's Earth as the next one to judge and reset, the group arrive at the World of Side Space to stop his threat after being informed by Zoffy. While Zero joined forces with Ultraman Orb and Ultraman Geed, Jean-Nine and the others could only guard them from space while contributing to the battle by blasting Cyber Planet Kushia with their attacks. After the battle, Jean-Nine alongside the Ultimate Force Zero left the planet after entrusting the Earth to the hands of Riku/Geed. Ultraman Geed The Movie: Connect the Wishes! 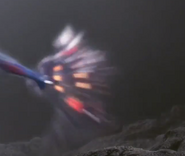 Jean Buster
Add a photo to this gallery
Jean-Star

Jean Cannon
Add a photo to this gallery

Jean-Nine and the others appear in Ultraman Retsuden episode 79.

Retrieved from "https://ultra.fandom.com/wiki/Jean-Nine?oldid=500746"
Community content is available under CC-BY-SA unless otherwise noted.