Ultraman Wiki
Register
Don't have an account?
Sign In
Advertisement
in: Heroes, Other Heroes, Allies,
and 10 more
English

Tatsunari Fukushima
Jean-Bot (ジャンボット Jan Botto) is a sentient machine that serves the royal family of Planet Esmeralda. He has an alternative spaceship mode called Jean-Bird (ジャンバード Jan Bādo), in which he aided Princess Emerana as transportation after Kaiser Belial's assault on her planet. He later joins Ultimate Force Zero.

After Ultraman Zero took Run as a host and was attacked by Legionoids, he and Nao accidentally stowed in a ship that blasted off into space, revealed to Jean-Bird/Bot with Princess Emerana on board. After almost wiping their memories in order to keep their whereabouts secret from Kaiser Belial, the brothers made friends with the princess and ship and began their journey searching for the Shield of Baradhi to stop the kaiser.

With many adventures, they eventually fight against Belial and his army. When Emerana uses herself to power Jean-Bird after losing power in a fight with Darkgone, Nao helps Jean-Bird assume his Jean-Bot mode. Together they manage to destroy Darkgone and help create the Ultimate Aegis to destroy Belial. When Zero begins to take his leave, Jean-Bot, Glenfire, and Mirror Knight intercept him and convince Zero to stay to defeat the remaining Legionoids, forming Ultimate Force Zero. Ultraman Zero The Movie: Super Deciding Fight! The Belial Galactic Empire

"He used me as the base for Jean-Killer. I believed he also copied my Advanced Artificial Intelligence."

―Jean-Bot said when he was captured

Zero took Jean-Bot away, and he began to regain his consciousness but he had to shut down his system to resist Beatstar's control. As the fighting with Zero continues, before Zero had a chance to defeat Jean-Killer, Jean-Bot stopped Zero in time and tells everyone that he is his brother, the rest of the team is surprised when Jean-Bot try to persuade Jean-Killer that living life forms is the not enemy, as he still under the control of Beatstar he continued to attack Jean-Bot and the team.

Emerana arrives and persuades him to open his heart to the truth to make up his own mind, he responds but Beatstar forcefully gains control of him again and he attacks Emerana with beams from his eyes and holds back the team with electric blasts to make them stay where they are, even how much Rei tried to stop her, Hyuga told Rei that they should trust her. She still tries to convince Jean-Killer as she believes that Jean-Killer has a heart as his attack missed countless times at Emerana. He stopped after he saw Emerana's tear, the team is freed and everyone is surprised when they see Jean-Killer's tears. Everyone had taught him about life, heart and the truth about organic lifeforms not being his enemy. Jean-Killer had made up his own mind but Hyuga reminds everyone that time is growing short before the sphere will hit the planet.

The team and Jean-Killer destroyed all surrounding Legionoids. Ultraman, Ultraseven, and Zoffy arrive to buy them time before the sphere hits the planet. Jean-Bot begged Jean-Killer to reveal Beatstar's location. Jean-Killer told them that he's on a half-cut moon. The team jump up to the moon and found a several of King Joes and Inpelaizers. Jean-Bot, Glenfire, Mirror Knight and Rei summoned Gomora to hold them for Zero, so Zero will be able to stop Beatstar. After everything is over, Jean-Killer had been renamed by Emerana as "Jean-Nine" and Zero had him joined the team as well. Emerana told Jean-Bot to be a good big brother to him. After Ultraman, Ultraseven and Zoffy left to Land of Light, Ultimate Force Zero is ready to save universe again. Ultraman Zero Gaiden: Killer the Beatstar

Like the rest of Ultimate Force Zero, Jean-Bot waited for Zero to finish his training in the Monster Graveyard. After Zero's adventure, he and the rest of the team greeted the Ultra and made their way back to the Living Dimension. A New Power

While Zero was being attacked by the Darkness Five (save Jatar and Sly) and Tyrant, Jean-Bot joined Ultimate Force Zero to hold them off while Zero went to rescue Pigmon. Jean-Bot fought Villainous and Tyrant with his brother. When Zero arrives at the scene, Jean-Nine greeted the hero. However, Jean-Bot senses something wrong and push away Jean-Nine, having himself killed as Zero was revealed to be under Belial's possession. While Ultraman Zero fell into submission, members of Ultimate Force Zero gives several encouragements to him before departing to the afterlife. He was later revived when Zero reversed the time flow and along with the other members, escorted his exhausted body. Awakening of Zero

Jean-Bot first appears fighting against a group of Galactrons, alongside Ultimate Force Zero. When Gillvalis targeted Geed's Earth as the next one to judge and reset, the group arrive at the World of Side Space to stop his threat after being informed by Zoffy. While Zero joined forces with Ultraman Orb, and Ultraman Geed, Jean-Bot and the others could only guard them from space while contributing to the battle by blasting Cyber Planet Kushia with their attacks. After the battle, Jean-Bot and Ultimate Force Zero left the planet after entrusting Earth to the hands of Riku/Geed. Ultraman Geed The Movie: Connect the Wishes!

Jean-Bot's offensive capabilities are accessed when a pilot accesses his movement controls by shouting "Jean Fight". Afterwards, he no longer needs a pilot to fight.

Jean-Bot appears in this novel series as a human transformed into a robot. Ultraman: Another Genesis

Jean-Bot is released as an Ultra Hero Series EX and an Action Archives Ultraman Zero shokugan (Candy toy), to commemorate the release of the movie. He was also made as an Ultra-ACT Figure by Tamashii Nations. 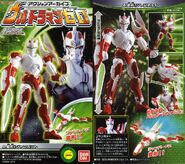 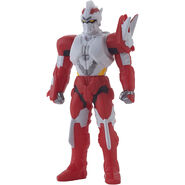