After the destruction of Gerada by Ultraman Joneus, an energy orb floated of the reptile's charred body and infected a nearby king cobra, turning the serpent into the first Janyur. Joneus, tired from his previous ordeal, barely lasted long against Janyur and had to fly off after snapping the monster's spine. This is the Ultra Star! Part 1

With Ultraman Joneus out of commission, the Scientific Defense Guard had to contend with the mutants being spawned by the rampant alien energy. The forces blasted the three-headed Janyur III (ジャニュールIII世 Janyuru Sansei) with lasers and rockets until they finally brought an end to its life. With a final beam of brilliant energy, the snake monster was engulfed in a fiery explosion. With the end of its life, the U40 Warriors, the same race as Ultraman Joneus, returned Choichiro Hikari to the Earth. This is the Ultra Star! Part 3 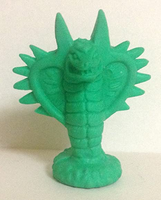 A Janyur eraser
Community content is available under CC-BY-SA unless otherwise noted.