Ultraman episode 23 "My Home is Earth"

Jamila:
Powered Jamila:
Jamila[3] (ジャミラ Jamira) was an astronaut who came into contact with an extraterrestrial mutagen and transformed into a monster. He returned to Earth with a vengeance for the human race, but was killed by Ultraman. Deemed a victim of an unfortunate fate, a plaque was raised in the former human's memory.

Originally a human astronaut who became lost in space while undertaking a mission with a manned satellite, Jamila landed on another planet without water or air, where he survived until tragically mutating into a space monster. Bitter and angry towards mankind for keeping his safety a secret to avoid hurting the public's faith in science, Jamila soon returned to Earth in an invisible spaceship to get revenge on those who'd forgotten him by attacking a peace conference in Tokyo over the arms race between the U.S. and Russia.

A search was sent out to locate the monster, soon catching up to him and attacking him however, his invisibility made it difficult to hit him until finally, it vanished into space. They then discovered that his invisibility was the result of his hull moving at high speeds, making it invisible to the human eye. They soon came up with a plan to use three special new weapons using different wave lengths of light, which together could reveal the invisible beast. The plan worked perfectly and Jamila was revealed and they opened fire. Once the disguise was blown, Jamila emerged and was chased by the Science Patrol into the forest. They opened fire but their weapons were useless against the space monster. Jamila finally managed to escape into the forest and the Science Patrol couldn’t find him.

The next day, the army attacked Jamila with flamethrowers, but the mutant human was unaffected by them. Enraged, Jamila launched an attack on a nearby village to vent his rage, igniting it into a blazing inferno with his flames. The space giant soon approached the site of talks aimed at ending the Cold War at the World Peace Conference in Tokyo, only to be attacked with rain bombs that injured him.

With the means to bring about his revenge on humankind for abandoning him now finally possible, Jamila wouldn't give up, and began kicking down the flag poles outside the conference. Before he could attack the building itself, Ultraman appeared to battle the mutated man, but Jamila, having once been a human, proved to be a very skilled opponent for the hero, and being of a similar build to the Ultra put up an impressive fight against him. Jamila and Ultraman fought back and forth until Ultraman began firing the Ultra Water Current at him. Jamila cried out in agony upon contact with the jet of water, as water was his weakness, while Ultraman continued to utilise the Water Current until the monster was subdued. Writhing in pain on the waterlogged ground, Jamila wept in rage and sorrow as he desperately tried to reach towards those who had abandoned him, before finally dying. Realizing Jamila was merely the victim of circumstance and politics, the Science Patrol gave Jamila a proper funeral and mounted a plaque in his honor.

Jamila was seen in an animated flashback as part of the Monster Army lead by Alien Empera in the Ultimate Wars in episode 25 of Ultraman Taro.

Jamila reappeared in the series, Ultraman: The Ultimate Hero, as Powered Jamila (パワードジャミラ Pawādo Jamira). Much like the original incarnation, Jamila's origins still remain relatively similar to its original appearance.

Astronaut Jamir Miller was sent by NASA on a top secret mission to Jupiter when a round ball of blue gas suddenly entered his craft. The gas bonded with his body (similar to how Ultraman Powered bonded to Kenichi Kai) and he became the human host of the titanium based life form known as Jamila. Three months later, Jamir returned to Earth where two government hired kidnappers were taking his daughter, Karen, and in a fit of rage he turned into Jamila. However, he disappeared once he lost sight of the kidnappers. Because Jamila did not cause a single casualty, WINR was split as to whether or not to consider him friend or foe until the government revealed their jurisdiction on all incidents involving Jamir. During the hostage exchange, the agent leading the two kidnappers agreed to let Karen go for Jamir agreeing to go into their custody. However, with Jamila taking over Jamir's body and the agent failing to capture him using a tranquilizer dart, the titanium based life form soon completely took over and broke out of the warehouse. After Jamila crushed the agent and kidnappers, Kenichi turned into Powered. As Jamila was beating down Powered, Karen tried to make Jamir within the creature remember who he originally was. Jamir's consciousness managed to hold off Jamila long enough for Powered to finish him off with the Mega Spacium Beam.

In episode 7, Jamila along with several monsters are seen cheering on Ginga as he fights Dark Galberos as a Spark Doll.

One year before Ultraman Victory's debut, Jamila appeared and ambushed the Mountain Peanuts team that protected Nosferu. He was killed after being hit with water bombs and water cannons, ending his life in a traumatic way. 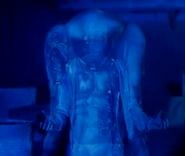 Gorumira is a version of Jamila that appeared in the Ultraman Nintendo 64 game.

Jamila appeared in the game, Ultraman Ball. In the game, Jamila is a relatively common opponent. 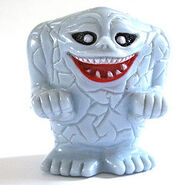 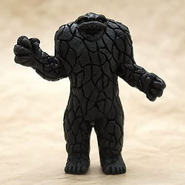 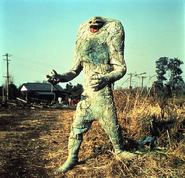 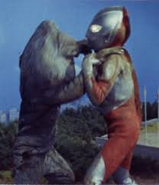 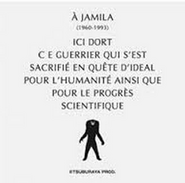 Jamila's writing on a tombstone. 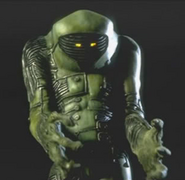 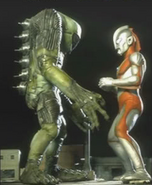 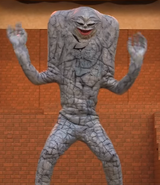