Iron King episode 2 "The Swan in the Ruins"

After the failure of Vacumira, the vile clan quickly dispatched a second machine. The Jairogesu’s first task was to lure out Gentaro Shizuka. Ordered by the obedient clan member Shu Jiro, the machine proceeded to level the city. Fortunately for humanity, Gentaro and Goro Kirishama were nearby and began another battle with the Shadow forces. Heroically they battled, but to utter surprise both of their forces were not enough to stop the monstrous robot. Gentaro was outsized and Iron King ran out of water.

Taking the guise of the mayor, Jiro sent out his powerful machine once again to attack Gentaro. Flinging chunks of rubble at the machine, thanks in part to his Iron Belt, Gentaro was able to hold off the robot long enough for Iron King to enter the fray. Yet once again the cutting monster was proving to be more than a handful. However, through sheer luck, Gentaro was able to steal the controller of the Ten Shadow agent. Using it, he sent the demon against its handler; which resulted in both of their mutual destruction. 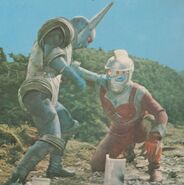 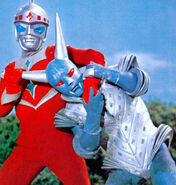 A Jairoges eraser
Community content is available under CC-BY-SA unless otherwise noted.
Advertisement