"Honestly, I forgot about my mission back then. I didn't know about true friendship on Earth but it made my life more wonderful, more meaningful."

―Jace as he finished his background.

Ultraman Ginga S episode 12 "In Order to Meet You"

Jace was one of Exceller's smarter minions and was sent on a covert mission to turn humans violent using the idol phenomenon. To accomplish that, he created many concert lighters infused with special chemicals and went to one of Chigusa's mini concerts, and distributed them to test them out. Baffled at the failure of his light sticks to work as intended, he turned his attention to Chigusa instead, who was performing Ultraman Ginga no Uta, to find out why. Before he knew, he fell in love with Chigusa's performance and decided to abandon his mission becoming the head of group of Chigusa fans in his human form, adopting the alias Tanba.

A year later, he appeared at one of Chigusa's concerts enjoying it and leading his group outside. When Vorst was about to hold the pop star hostage, Jace threw a tambourine at the fiend, dodged his attack, revealed his true form, and launched a couple of lighters at his eyes, blinding him for the moment. After Vorst was beamed up by Exceller, Chigusa thanked him for saving her and revealed to three members of the UPG his story. He then willingly let himself be taken into custody by the UPG members. Later, while in the car with UPG, he sensed that Chigusa is in grave danger. He teleported out of the car and ran to her rescue in his true form, promising to return later. After Vorst Monslived into Zoa Muruchi, Jace changed his size to the monster's but before he can attack, he was struck down by the monster's Energy Beam. Even with Ultraman Victory and Ultraman Ginga appearing to help him, they were no match for Zoa Muruchi. Strangely, the monster only wanted to put the hurt on the alien for some reason. After Chigusa sang Ultraman Ginga no Uta to encourage Jace, he got back up, summoned a couple of lighters and started to dance. When Muruchi became distracted by the alien's dancing, the two Ultras defeated it once and for all. He is last seen at another of Chigusa's performances in both of his forms. He changed back into his human form before any of the other fans saw him. Jace is allowed by UPG to remain on Earth and live in peace, deciding that this Alien Metron is harmless.

He reappeared in episode 16 where he was shown behind the scenes of Chigusa's latest music video along with Kenta, who was filming the whole thing. 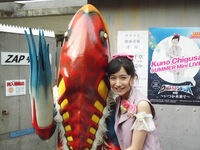 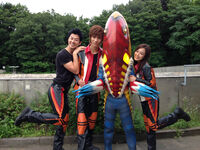