Izenbo (アイゼンボー Aizenbō) is a character in the Dinosaur Great War Izenborg series. Izenbo is the second combination of two demi-cyborgs Ai and Zen Tachibana. He is known as Gemini in the U.S.A. version. Though the series ran with 39 episodes, Izenbo did not first appear until episode 20.

Ai and Zen Tachibana, the protagonists and members of the D Sentai team, unite to transform into the Izenborg Duo to destroy the monsters: Zen becomes Izenborg Man, the full human pilot of the ship; Ai becomes the Mother Computer of the ship; the tank Izen-I converts into the powerful Izenborg-Go.

On episode 19, Ai is badly injured and damaged. She is repaired by the scientific team, then a mysterious "alien" power surge coming from a cross further "charges" her. Suddenly, she appears stronger and faster. From this point, when the Izenborg-Go ship attack doesn't work anymore, the duo can transform again to form the giant warrior, Izenbo. Zen becomes the main consciousness and body, while Ai - inside a modified version of the Izenborg-Go - is embedded into the head in order to provide him with energy and additional computing faculties. The fusion process to generate Izenbo is called Bo Change. It is uncertain what is Izenbo's true nature, but he could be the natural and perfect fusion between human and machine.

Izenbo is able to sustain his form for 2 minutes and 20 seconds. 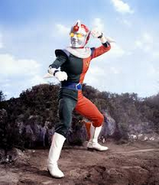 Izenborg returns for a special to promote his DVD.
Add a photo to this gallery