"You know it wasn't you who slayed Izac. We, the humans who made the Altes Tigers extinct, slayed him."

―Hiroya Fujimiya to Gamu Takayama, "The Silver Eyes of Izac"

The Atles Tigers were made extinct in the year of 1970. However, in year 1999, two scientists successfully created a clone of the extinct species and named it the Izac Project. Unfortunately, a wormhole opened over the laboratory building and the energy it released destroyed the building, also sucking in the Izac tiger clone. Later, the wormhole released the mutated version of the Izac. Izac was encountered by Ultraman Agul, but Izac's strength was proven to be more powerful, with Izac defeating Agul easily. After defeating the Ultraman, Izac began to destroy the city in a deadly flaming shower, but he was sucked in by the wormhole agian. The next night, Izac encountered Ultraman Gaia, who intercepted him for destroying the city. Izac's strength was giving Gaia a hard time, to even the odds, Gaia then changed into Supreme Version. However, the two almost matched each other, but Izac was more powerful and overpowered and injured Gaia. With his Color Timer blinking faster, Gaia knew that he had to defeat Izac quickly. Gaia then jumped into the air, with Izac following. Ultraman Gaia then charged his foot with energy and performed Supreme Kick, the attack vaporized Izac once and for all.

Izac as the Altes Tiger in "A sight of Izac", by Ai Ohta 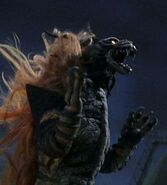 A "silver" eye of Izac