Taking refuge under the ground of a pacific island, Islanda was a force to be reckoned with when mankind disturbed it as they mined for gold on the island his reef was connected to. Snake-like creatures emerged from the blue depths and began to spew blue fire before vanishing back into the depths. It was soon discovered by the Scientific Defense Guard's cook and monster enthusiast, Yuriko, that the snake-like monsters were not the true beast, but just a part of it. The real form of Islanda was a massive octopus-like beast equipped with the numerous jawed tentacles. After narrowly escaping Islanda, Yuriko alerted the rest of the Scientific Defense Guard as they prepared a new battle against the monster and soon the creature emerged from beneath the island's rocky ground, unleashing its tentacles and fury.

After the Scientific Defense Guard failed to slow the tentacles down, Choichi turned into Ultraman Joneus. However, after the Planium Beam failed to stop them, Joneus was quickly ensnared by three of the tentacles. The hero’s color timer began to flash and his energy began to drain. Fortunately the garrison managed to get the kaiju’s attention, allowing Joneus to get free. The humans tried to fire a powerful warhead into its body, but numerous tentacles lash out, catching the explosive in midair! However, as the tentacles snaked around it, Joneus pulled the rocket free and threw it into an opening on its back! The bomb exploded inside its body and Islanda vanished into the hole in which it crawled forth.

Thinking the battle was over, Joneus prepared to leave until he spotted the strange creature burst from its coastal reef and attempted to flee to a new location. The hero quickly gave chase and launched his Planium Beam at the weakened beast, completely engulfing it and killing it in a massive ball of twisting fire. 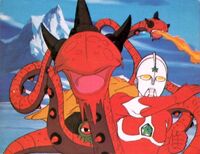 An Islanda eraser
Community content is available under CC-BY-SA unless otherwise noted.