None
Iron Rocks (アイアンロックス Aian Rokkusu), also called Ironrocks[1], is a submersible battleship constructed and operated by Alien Mimy as their war machine. It first appeared in episode 21 of Ultraseven.

Created by the Alien Mimy using old submarines, Iron Rocks was a highly armed submarine-battleship hybrid that was kept beneath the ocean. It destroyed any ship unfortunate enough to be caught in its line of fire. The UG was sent in to investigate the matter and launched two new submarines: the TDF HRs 1 and 2.

After one of subs escaped a whirlpool, they spotted a Alien Mimy's star-like saucer under the water and began pursuit. The space ship  outmaneuvered both submarines in the rocky coral and used special bubbles to jam communications. With the submarines incapable of doing anything, Ironrocks was commanded by the Alien Mimy to surface and scare off the population of a local harbor town.

Iron Rocks returned later that day to inflict catastrophic damage to the community and the Ultra Guard was incapable of damaging it. The situation grew worse when Dan was shot out of the sky with one of the Ultra Guard's fighters, but the assault continued with the other fighter, which blew a hole in Iron Rocks. However, the Ultra Guard was forced to stop due to analysis indicating that Ironrocks was actually an armed bomb. Upon the cease fire Iron Rocks remained stationary for the rest of the day and into the night until the Mimi Seijin called on it to fire on the town once again.

The explosions awakened Dan, and allowed him to transform. After Alien Mimy taunted Ultraseven, he had his ship use its chains to prevent Ultraseven from moving around, only for the hero break his bonds with the Energy Cartwheel. Ultraseven delivered the finishing blow with the Emerium Beam, detonating the craft. 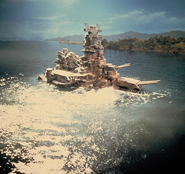