The Shiranui Clan have planned for 2,000 years to conquer Japan in retaliation for their nomadic ancestors being banished from the country by the Yamato Clan (who eventually became known as the Japanese people). Each armored ninja-like member of the clan controls a gigantic robot warrior in order to overthrow the "Yamato Government," as they call it. In response to this terrorist threat, Japan's National Security Organization send agent Gentaro Shizuka, disguised as what can best described as a Spaghetti Western version of a singing cowboy, to stop their plans with the assistance of comical, mountaineering-clad Goro Kirishima. After Iron King and Gentaro defeated The Shiranui Clan and their humanoid robots in episode 10, another terrorist organization called the "Phantom Opposition Party, or the "Phantom Militia" for short. Their goal was to overthrow the Japanese government and establish a new government in its pace in their bid for world conquest by using terrorist tactics. Unlike the Shiranui Clan, who utilized humanoid robots, the Phantom Militia use dinosaur-like robot monsters for thier army. After the Phantom Militia are defeated in episode 18, another group arrives to menace Japan. This time it's the Titanian invaders, from the Titanian Nebula, who have arrived from their home planet to take over the earth to exploit its more abundant natural resources. Unlike the Shiranui Clan and the Phantom Militia, who used robots for their monster armies, the Titanians used insect-like alien monsters for their monster-of-the-week. Not only this, but the Titanians are able to "body-jack", or take over the bodies of people and control them like puppets/ In the last two episodes of the series. the Titanians were able to body-jack Goro, and control not only him but Iron King as well and use him to attack Tokyo. The military planned to attack him, but Gentaro managed to convince them to let Iron King use up his bodily water supply so he could be more manageable. It was then that Gentaro realized that Goro was in fact Iron King. While in the process of trying to remove Goro's ability to transform into Iron King, the Titanians unleash Cricketton on Tokyo. This damaged Professor Tsushima's laboratory, and an electrical surge filled Goro's body that not only broke the Titanian's hold on him, but strengthened him even further. After defeating Cricketton, Iron King aided Gentaro in defeating the Titanian leader ad ending the threat once and for all. In an unusual direction for such tokusatsu programs, it is not the heroic but often surprisingly ruthless Gentaro but the bumbling, bespectacled Goro who has the power to become the giant cyborg Iron King. Also in an unusual direction, Iron King ofte needs help in defeating an opponent, primarily against the Shiranui Clan and Phantom Militia, where the monster-of-the-week gives Iron King a hard time, or actually defeats him, leaving the job of defeating the monster to Gentaro, mostly because Iron King used up his bodily water in just a few minutes. It wasn't until towards the end of the Phantom Militia arc that Iron King started to defeat opponents on his own, destroying Tora-Giras, Dodzilla, and Kumagross before taking on the Titanians and wiping out their monsters himself, with limited assistance from Gentaro.

To transform, Goro presses the two switches on his hat. While transformed he uses up his body's water supply and can only sustain his transformed state for a few minutes. 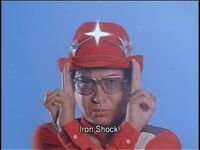 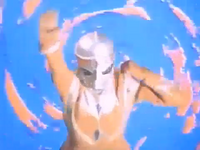 Unknown Shield
Add a photo to this gallery 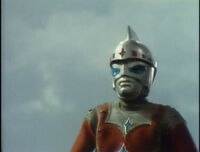 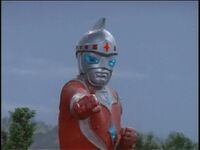 Add a photo to this gallery
Retrieved from "https://ultra.fandom.com/wiki/Iron_King_(character)?oldid=516388"
Community content is available under CC-BY-SA unless otherwise noted.