TBA
The alien Invaders (インベーダー Inbēdā) were evil aliens and the main antagonists of the series, Mirrorman.

The Invaders' true form is shown in episode 10 as white colored aliens with fin-like projections on their heads. Later, in Episode 26 they are green coloured instead. They usually disguise themselves as Men In Black, sometimes wearing a helmet (Episode 5). They can take the form of spectres such a noppera-bō (In Episodes 5, 6, 34 and 39), and the face of the skull (Episode 43). It is also possible for them to possess humans and dolls (Episode 16).

Invaders were aliens that came from the Red Planet, Planet Devil, also known as Planet X. The aggresive race aimed to obliterate humanity, they came to earth on the various types of spacecraft. They carried out many evil plans but they were thwarted by Mirrorman and the SGM (Science Guard Members). The Invaders can transform into giant monsters after being bathed in a beam from their spaceships.

The Invaders appeared in episode 14 and 16 of Mirror Fight. Stock footage of their appearances in Mirrorman were reused in this series. 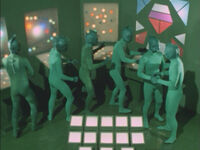 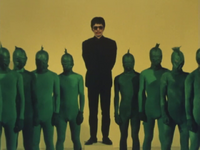 Add a photo to this gallery
Retrieved from "https://ultra.fandom.com/wiki/Invaders_(Mirrorman)?oldid=511152"
Community content is available under CC-BY-SA unless otherwise noted.