"Born in the nebula known as M78, together they fight for peace and justice throughout the galaxy. Warriors of great compassion and courage"

Around 1 million Residents of the Land of Light

Thirty thousand years ago, the Land of Light was attacked by Alien Empera and his monster army in what would later be called the Ultimate Wars. The most decorated hero of this conflict was Father of Ultra, who dueled and defeated the dark emperor. Father of Ultra, then known as Ken, was made the first captain of the Inter Galactic Defense Force. Other Ultras soon joined the organization for the sake of promoting peace in the universe.

Their numbers grew and eventually, the organization reached a million members strong. Ken was promoted to the position of Top Commander after the Ultimate Wars and took on the title Father of Ultra. Among the Space Rangers are the Ultra Brothers, many of whom have become a legendary presence on Earth.

Ultraman Mebius has stated that prior to the creation of the Inter Galactic Defense Force, Ultras of the Land of Light believed their powers should be used to do good. This implies they enforced justice across space in a less organized fashion.

There are several known branches and groups within and/or affiliated with the Inter Galactic Defense Force: 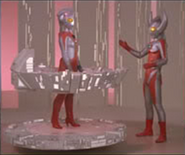