Ultraman Ginga S episode 12 "In Order to Meet You"

Inpelaizers are the soldiers/scouts of the Empera Army in his conquest to cover the Earth in darkness. They are revered as being very strong according to Father of Ultra, and the superior Ultra warned Ultraman Mebius to return to the Land of Light as a result, otherwise the young Ultra would die in battle against it. When one of the Inpelaizer was sent to Earth by Empera, it immediately began to carry out its master's orders and proceeded to destroy the city it was in. Mirai refused to leave Earth in danger and so after parting ways with GUYS, he revealed himself to Ryu of GUYS of his true identity by transforming into Ultraman Mebius to battle the robot. As predicted by Father of Ultra, the Inpelaizer greatly outclassed Ultraman Mebius in battle with no way Mebius could stop it. Even after using his Mebium Shoot and transforming into Mebius Brave, the Inpelaizer kept regenerating the damage received and transformed one of its arms into a blade to outdo Mebius yet again. Suddenly as the robot closed in on the weakened Mebius, its assault was stopped by the appearance of Ultraman Taro, who had come to battle the robot instead per Father of Ultra's command. Unlike Mebius, the more experienced Taro was able to handle the Inpelaizer with ease until he managed to destroy its top half with the Strium Beam. However the Inpelaizer was not finished and so it teleported away to heal. Day of Farewell

After it was repaired, the Inpelaizer reappeared in the Awasawa Canyon where GUYS was waiting to ambush it with a surprise attack. Ultraman Taro also appeared to do battle against the robot. When GUYS's ambushed failed due to Inpelaizer's teleportation ability, Taro was left to face the robot once again. Inpelaizer then proceeded to spray the canyon with its cannons, taking out all opposition from GUYS and even shrugging off Taro's own Strium Beam as well. With only one option left, Taro activated the Ultra Dynamite and with it, blew the Inpelaizer to pieces, leaving Taro physically exhausted. However the attack only managed to blow the Inpelaizer apart, allowing the robot to reform its body back together. With Taro badly beaten, Mirai transformed into Ultraman Mebius, revealing to all the members of GUYS his true identity, and so both master and pupil ultra proceeded to work together to stop the robot. Inpelaizer however was distracted by GUYS's presence and so tried to finish them off, leaving Mebius to shield them from an oncoming attack. Remembering the promises he made to his friends, Mebius survived Inpelaizer's blast and in turn, gained his new Mebius Burning Brave form. Now outclassing the Inpelaizer instead, Mebius wasted no time in destroying it with the Mebium Burst. The Flame of Promise

In the series' 3-part series finale, as part of the Emperor's final plan to cover the Earth in darkness, Alien Empera released 13 Inpelaizers all over the Earth at every world power capitol. Alien Empera then demanded that the humans hand over Mebius or they would face the wrath of his Inpelaizers. The first to activate was the one in Tokyo. Fortunately, GUYS and Ultraman Mebius were quick to respond to its assault and after a short battle, Mebius destroyed it with his Burning Mebiuspin Kick. However, two more Inpelaizers appeared shortly after the first was destroyed and proceeded to double-team Mebius. GUYS was able to destroy one of them with METEOR and Mebius destroyed the second with his Burning Mebium Dynamite. Like Taro however upon destroying the Inpelaizer, Mebius was left exhausted of his strength and like before, another Inpelaizer appeared in their place to pick apart the exhausted Ultra. Unable to even stand up, Mebius was ultimately forced to retreat before he could die, leaving an Inpelaizer to watch over Tokyo over again.

After the people of Earth refused to hand over Mebius to the world, the Empera activated the Inpelaizer to attack the Earth, but were met with opposition of other GUYS members around the world. Meanwhile the latest Inpelaizer was still in Japan resumed its attack, and was again met with opposition by GUYS and Mebius. Advent of the Emperor -Final Trilogy I- Once again, Mebius was forced to use the Burning Mebium Dynamite to destroy the Inpelaizer but it put Mirai into critical condition as a result, thus forcing Mirai out of any further action. Ultimately, only two Inpelaizers remained and thus set their sights on GUYS's HQ instead. GUYS however was prepared for this and managed to destroy one of them with their weapons, but when the other teleported by surprise, it crippled their HQ in an ambush. Fortunately before it could do anymore critical damage, the last Inpelaizer was sliced in half by Zamsher. However with all of his Inpelaizers destroyed, this set the stage for the appearance of the emperor himself. Dark Clouds of Despair -Final Trilogy II-

In part 1 of the special, Ultraman Mebius is ambushed by an Inpelaizer while he is fighting Grozam of the Dark Four Heavenly Kings. During their battle, Grozam retreats to join the Dark Four Heavenly Kings and leaves the Inpelaizer to deal with Mebius. The battle is at a standstill until a second Inpelaizer appears and ambushes Mebius just as he destroys the first one and Mebius is quickly overpowered by the ambush. Fortunately, the cyborg Mechazam shows up and destroys the Inpelaizer by slicing it in half. Ultraman Mebius Gaiden: Ghost Rebirth

Inpelaizer reappeared in this side story coinciding the film, Ultraman Saga. Based on the data of Alien Empera's Inpelaizers, Beatstar mass produced several units into Inpelaizer (BS) (インペライザー Inperaizā Bītosutā) as part of his Mecha Robot Army.

In part 1 of the special, after Rei's Gomora destroys a Legionoid Beta, Inpelaizer (as well as King Joe and Ace Killer) appear and together team up and beat down Gomora, forcing the monster back into Rei's Battlenizer. Shortly after, The Ultimate Force Zero arrives on the scene and battles the robots. Mirror Knight battles with the Inpelaizer and eventually destroys the robot by tearing off Inpelaizer's blade and gutting him in the chest with it.

In part 2 of the special, it is revealed that an army of Inpelaizers have been constructed to serve Beatstar, Mirror Knight and Glenfire are thus seen working together to stop the army from attacking while Ultraman Zero fought with Beatstar himself. After Beastar is defeated, the Inpelaizer army is destroyed in the planet's destruction. Ultraman Zero Gaiden: Killer the Beatstar

Several Inpelaizers made a reappearance in episode 3 of Ultraman Ginga S.

They were all "Monslived" by Chiburoids and arrived on Earth to destroy while Alien Chibull Exceller uses his Tractor Beam to steal some Victorium Stones. Hikaru Raido transformed into Ultraman Ginga to fight them. Sadly, he only destroyed two of them with his Ginga Cross Shoot before the rest of the Inpelaizers overpowered him with their Gunports and Triple Gatling Guns. When they tried to destroy Arisa, Gouki, Sakuya, and Repi, Ginga rushed in to protect them. They then powered down when Sho shot at Android One Zero and Alien Guts Vorst with his EX Red King Spark Doll via Victory Lancer. After a fight with Zero One, Guts Vorst commanded the Inpelaizers to resume destroying the city then Sho transformed into Ultraman Victory to take them on. He destroyed many of them with both the UITrans EX Red King Knuckle and many more with the UITrans Eleking Tail before he was confronted by King Joe Custom "Monslived" by Alien Guts Vorst. While they fought, the Inpelaizers helped King Joe by blasting him, and although some of them were destroyed by Victory's Victorium Shoot they managed to send him flying with help from King Joe's Pedanium Launcher. Hikaru then transformed into Ginga again, despite his injury from earlier, to save Ultraman Victory. He managed to kill some of them with his Ginga Fireball but the Inpelaizers still managed to overpower them until Ginga transformed transformed into his newest form, Ultraman Ginga Strium. He easily destroys some of the Inpelaizers with his Strium Beam and then easily finishes off the rest with his Spacium Beam.

An Inpelaizer reappeared in episode 12 where it landed in the city and started using his tractor beam to find some more Victoriums. UPG immediately opened fire on the robot and Sho Ultlived into Ultraman Victory to stop him. After an epic brawl, Sho UITrans the Shepherdon Saber and defeated him with the Shepherdon Saber Flash. 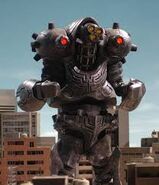 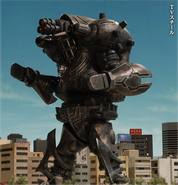 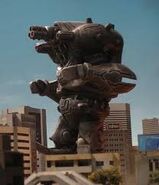 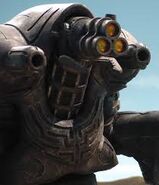 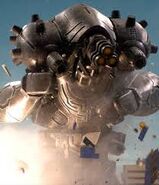 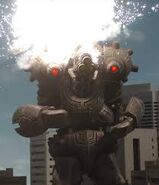 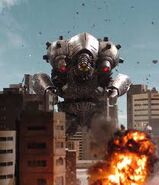 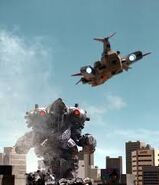 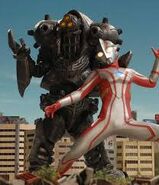 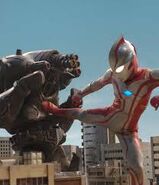 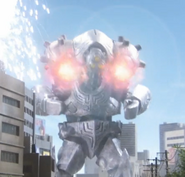 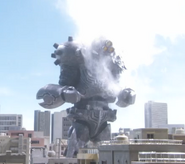 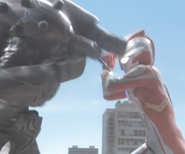 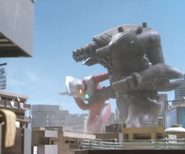 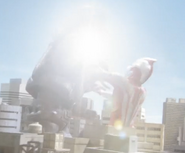 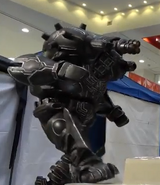 Inpelaizer in a stage show