Mirror Fight episode 8
Inbera (インベラー Inberā) is a bird-like Kaiju that appeared in the series, Mirrorman.

Inbera was a robot created by the Invaders to protect their base that was under construction in Tanzawa as well as use it as a battery for electrical power. It first attacked a pair of jets that discovered it on radar, both pilots dying in the attack. Shortly after Kyotaro headed toward Tanzawa to investigate, Inbera attacked the Okutama Station, absorbing all of its electricity before flying off. The SGM was alerted to the incident shortly after while Kyotaro brought an amnesiac woman back to the headquarters. On the woman's camera they found footage of Inbera flying by her as well as an Invader base. The SGM then managed to figure out the Okutama Station attack was to collect electricity as a battery for the Invader base. Meanwhile, Inbera attacks another power station, the Self Defense Force retaliating with a jet and three tanks to no avail. Kyotaro managed to recover the amnesiac woman who remembered running from Inbera after seeing the base and her boyfriend, Shinichi being killed by the robotic bird.

Kyotaro went to his room to transform into Mirrorman while Inbera decimates the tanks attacking it. The hero arrives through a car mirror to grab Inbera by the legs as it tried to escape. Mirrorman was soon forced to let go once Inbera shocked him. The robotic bird turned around to unload missiles launched from the head followed by using its laser eyes. After a second barrage of missiles Inbera flew back to defend the base which was being assaulted by a garrison of tanks and 6-tube missile launchers. The robotic bird obliterated the Self Defense Force until Mirrorman caught up to continue their fight. Before long Mirrorman managed to cut off Inbera's wings and tail with the Mirror Slicer, forcing it to crash and explode. Monster Bird Inbera Appears!

Inbera appeared in episode 8 of Mirror Fight. Stock footage of his fights in Mirrorman were reused in this series. 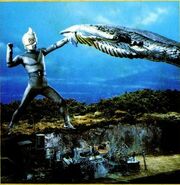