Imitation Ultrasevens are a group of fake Ultrasevens that all have slight differences from the original hero. The Imitations appeared in two seperate stage shows at the Ultra Hero Battle Theater, one in 2007 and the other in 2008.

In the stage show, Ultraman Zearth and Ultraman Mebius attempted to figure out who is the real Ultraseven. In fact they were all fake Ultras created by Alien Pegassa and Alien Godola. The copies were used to distract Zearth and Mebius long enough to power up Robot Ultraseven. 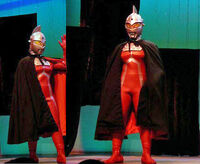 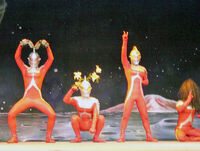 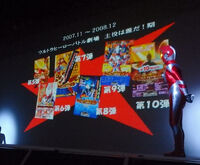 Add a photo to this gallery
Retrieved from "https://ultra.fandom.com/wiki/Imitation_Ultrasevens_(group)?oldid=511140"
Community content is available under CC-BY-SA unless otherwise noted.