Ultraseven episode 46 "The Showdown of Dan vs Seven"

Ultra Galaxy Legend Gaiden: Ultraman Zero vs. Darklops Zero
Imitation Ultraseven (ニセウルトラセブン Nise Urutorasebun) is a robot duplicate of Ultraseven created by the Alien Salome. This particular model was mass produced in Ultra Galaxy Gaiden as part of an army to conquer multiverse.

In order to conquer the Earth, the Alien Salome group decided to not employ the usual method, but instead began to study and replicate Ultraseven. Recreating the warrior of good into a robot of evil, only one key ingredient was missing: the Emerium Beam. After kidnapping Dan and extracting the secrets of the attack from his brain, the aliens unleashed their war machine on humanity. As the invaders looked to leave Dan behind, to go up in flames with their island base as their robot rampages and they escaped, the hero managed to free himself. As he went on a quest to get his Ultra Eye back, he unleashed the capsule monster Agira on the doppelganger. The dinosaur-like monster was weak compared to Imitation Ultraseven and, worse yet, it was confused and afraid to attack what it thought was his own master. Hiding and cowering as Imitation Ultraseven beat him, the creature was returned to his capsule as Dan retrieved the eye and entered the battle. The two twins battled on the cliffs, trying to knock one another off. Soon the fight took to the sky and then the sea where, in a massive explosion from one of Ultraseven's attacks, Imitation Ultraseven was destroyed, allowing the real one to vanquish its evil masters also. The Showdown of Dan vs Seven

Imitation Ultraseven reappeared in the 2-part prequel to the film, Ultraman Zero The Movie: Super Deciding Fight! The Belial Galactic Empire. Here, he was mass-produced alongside his brother units under the name Imitation Ultraseven (SR) (ニセウルトラセブン Nise Urutorasebun Sarome Robotto) and becomes the leading unit of the Imitation Ultra Brothers (SR Team).

He first appears with his artificial brothers confronting Ultraman Zero and an alternate ZAP Spacy crew. While the others battle Zero on the surface Seven downed the spaceship and joined in the battle against his template's son. Zero eventually managed to get away after defeating Imitation Zoffy. Imitation Seven and the remaining robot Ultras caught up to him during his battle with Darklops Zero after he had lost his Zero Sluggers. With all of them attacking him while Darklops Zero floated on the sidelines, Imitation Ultraseven and the others were then pulled in to Darklops Zero's dimensional energy attack to destroy Zero, Zero's robotic double not caring if his unexpected comrades were destroyed in the process.

In the space between dimensions, Zero battled and defeated Imitation Ace, but the combination of Imitation Seven and Imitation Ultraman left Zero in a desperate situation as he was weakened and outnumbered until Ultraman Leo came to his rescue. The Ultraman and Seven unit was destroyed by their Leo Zero Double Flasher attack. While Herodia was preparing to transport the Imitation Ultra Brothers army, Darklops Zero awakened and destroyed the entire factory alongside the fake Ultra Brothers. 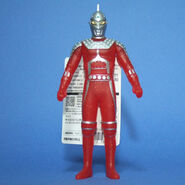 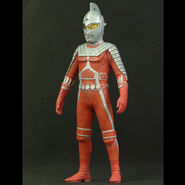 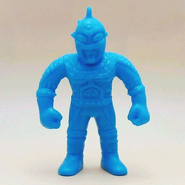