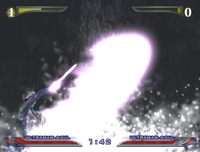 Photon Screw
Add a photo to this gallery 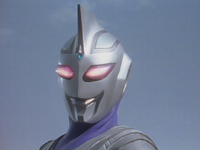 "Ultraman Gaia, prepare to face the wrath from the souls of the defeated kaiju!"

Phantom Ultraman Agul (幻影ウルトラマンアグル Gen'ei Urutoraman Aguru) was a hallucination of V1 Ultraman Agul that served under Queen Mezard. He was also dubbed as "the wrath of the defeated kaiju".

Once Ultraman Gaia entered Mezard Queen's dimension, she used her illusion powers to create the second Imitation Agul. The "Phantom Agul" came to being through a giant wall of flames and quickly attacked Ultraman Gaia. Gaia, on the other hand, could not bear attacking an enemy that looked exactly like his friend and was quickly beaten down. However, just as Phantom Agul was about to choke Gaia to death, a special missile fired by the XIG's Team Lightning destroyed Phantom Agul and Queen Mezard's Super Dimension. 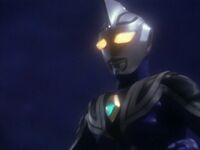 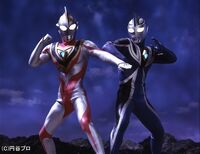 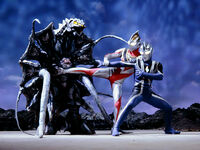 Retrieved from "https://ultra.fandom.com/wiki/Imitation_Ultraman_Agul?oldid=511136"
Community content is available under CC-BY-SA unless otherwise noted.