Imitation Ultraman first appears with his artificial brothers, confronting Ultraman Zero and the alternate ZAP Spacy crew. However, Zero managed to escape them after killing Imitation Jack and Imitation Zoffy. The battle still continued even with the intervention of Mecha Gomora and Darklops Zero, the latter banishing Zero, Imit Ultraman, Seven and Ace into the a pocket dimension. Imitation Ultraman and Seven fought against Zero in the pocket dimension through their combined attacks, but the addition of Leo helped even the odds and turn the tables via Leo Zero Double Flasher, killing both androids and allowing them to escape.

Both the Ultraman and Imitation Ultraman Leo (SR) were created by Alien Salome Lije in order to exact her revenge against the Ultra Warriors (particularly Ultraseven) for the death of her father in 1968. The Ultraman and Leo android easily overpower their original counterparts due to the latter reaching their time limits. When Ultraman Zero faced against Lije, he managed to destroy the androids but Lije's acquired mass of Minus Energy revived the two robots to their full strength and defeated the young Ultra. Zero returned with his cavalry of five other Ultras (Zearth and Nice included) to free Ultraman, Leo and Reimon from their crucifixion but accidentally triggered an alarm that summoned the Salome Robot duo, Mecha Gomora and Darklops Zero. The captives were revived and freed afterwards thanks to immense light energy and defeated their respective mechanical doppelgangers. Imitation Ultraman was defeated by the original's Spacium Beam. 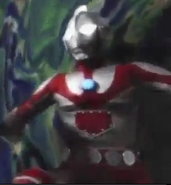