"They might just be robots, but those Ultra Brothers sure put up to fight."

To invade the multiverse under the Alien Salome's leadership 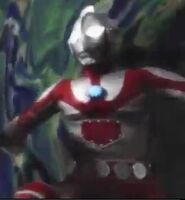