Daisuke Terai
Imit-Ultraman Belial (ニセウルトラマンベリアル Nise Urutoraman Beriaru)[1] was an Ultra created from experimentation on Ultraman Belial's cells. While appearing similar to the former's Reionics form, he sports a yellow-gold color scheme on his crest and claws.

Wanting to defeat the Tri-Squad and Ultraman Tregear, a trio of aliens, Alien Zarab, Alien Godola and Alien Sran, sought out Alien Chibull Mabuze, who was in possession of Ultraman Belial's genetic samples. Together, they created a clone of Ultraman Belial who had his template's fighting prowess, but lacked intelligence.

The Belial clone went on a rampaging spree and fight against all three members of the Tri-Squad, surpassing each of them in strength, speed and firepower. Tregear joined the fray, wanting to get rid of Imit-Belial for interfering with his plans. His mocking of the clone leads to Mabuze empowering him with more Belial cells, but it eventually becomes his own undoing as Tregear leads said copy to attack its creators, crushing them under the building they were in.

As Taiga was on the brink of defeat, Ultraman Zero suddenly appeared and saved him in last minute. They join forces to attack both evil Ultras. After their beam struggle ended in a tie, Taiga Tri-Strium made use of the Plasma Zero-let to initiate Taiga Dynamite Shoot and open fires on the Imit-Belial, who Tregear used as a meat shield. The Belial copy was destroyed while Tregear escaped unharmed. Clash! Ultra Big Match!

The death of Imit-Ultraman Belial 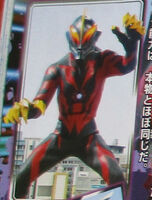 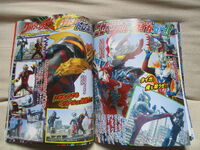