"We are the Iludo. We mean you no harm... We have come to this planet in search of others to coexist with us. Our's is a highly developed civilization, which has overcome pain sorrow, and fear. All are equal and all live in happiness."

―Iludo's address after its ship lands in Japan

None
The Iludo (イルド Irudo) were parasitic aliens that came to Earth in an attempt to install a new hivemind and convert humanity into their own. The hivemind they installed was weakened by Shinjoh of GUTS, and the remaining Iludo merged into a giant which Ultraman Tiga easily dispatched.

As GUTS talked to a group of TPC members (Inui and Kinosaki) in space, something went terribly wrong and the ship lost contact, then fell into the atmosphere, crashing to the ground. When GUTS arrived, a strange being ran out of the undergrowth, an Iludo. Seeing it as a threat, they shot and seemingly killed it. They soon boarded the ship, finding one of their friends wounded. Soon, a ship landed in the middle of the day, more from the same species that GUTS had just attacked, but coming with a message of peace for the human race. They examined the alien they had to shoot, finding a communicator on it, discovering it was somehow Kinosaki of the space crew and that one of the creatures had attacked them. Thankfully, they managed to electrocute and drive the beast into space but both were wounded, one of them transforming into the creature GUTS had killed. Realizing the Iludo were far from what they appeared, GUTS evacuated the city but a group of people refused, wanting to meet the 'friendly' aliens. But at gun point the sole survivor of the spaceship crash, Inui, forced them to turn around. But suddenly, he collapsed to his knees and began speaking strangely. After examining his old friend's wound, Shinjoh discovered the awful truth, the man was transforming into an Iludo as well. Inui decided that if he was dying, he’d take the Iludo with him and ran towards the base. An x-ray of the building revealed a giant brain and soon, the ship began snatching people up with long energy tentacles. Shinjoh and the doomed man helped save the people in the area and one of the GUTS Wings opened fire on the ship but it shot him down. As they ran, the duo ran into an Iludo. She demanded they hand over the people and Shinjoh shot her in the chest as she tried to launch her tentacle, killing her. Shinjoh was then grabbed by the mother ship as even more Iludo appeared. The rest of GUTS arrived on the scene to launch the attack on the mother ship. The mother ship couldn’t survive the assault and was critically damaged. Realizing they could no longer easily capture humans, the Iludo merged to form one giant alien and decided to attack. Daigo Madoka quickly transformed into Ultraman Tiga and assaulted the villain, beating him down and blasting him but when the mother ship began to activate, Tiga was distracted, letting the alien gain the upper hand. The giant brain inside the machine began to activate but Inui told Shinjoh what to do using the knowledge gained from the infection, telling them to all say the same thing at the same time. Meanwhile, Tiga was being beaten down by the giant Iludo but Shinjoh and GUTS destroyed the giant brain. This distracted the Iludo, giving the opportunity for Tiga to unleash the Zeperion Beam and blow the invader to pieces. Shinjoh managed to get an antidote for his friend and cured him of the infection, ending the threat of the Iludo invasion. 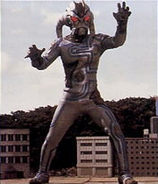