None
The Iguanodon (イグアノドン Iguanodon) is a dinosaur from the Early Cretaceous period. A Iguanodon was one of the many poacher targets in Dinosaur Expedition Born Free. 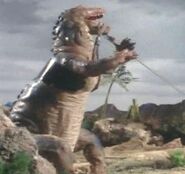