"Atsushi, Tatsuya and Naoko are my friends. Thank you, everyone. Goodbye."

None
Igomas (イゴマス Igomasu) was a building-like robot from outer space that appeared in Ultraman Cosmos episode 4 "The Fallen Robot".

Igomas was actually a toy from which fell from their ship and crashed into the Earth. While the SRC investigated him, the toy makes friends with three children, Atsushi, Tatsuya and Naoko. Igomas divulges in them the nature of its origins, its owner Geban (ゲバン Geban), and comments on how Earth is just as beautiful as its home planet, before encapsulating the children in a levitating sphere with its powers to show them the beauty of their planet.

After lowering the children back down, a tag stuck on Igomas fell off. Reading the contents of the tag, Igomas was left in disbelief, and afterwards transformed into its robot form in a feat of anger. While it proceeded to terrorize the countryside, Doigaki, who had just finished decoding the alien writing on the tag, revealed that it was a waste disposal sticker: as Igomas was an old model, and its batteries were discontinued, it was promptly disposed of.

Musashi transformed into Cosmos and tried his best to calm the robot down, but this was to no avail, and the giant had no choice but to activate Corona Mode to counter the robot's super strength. Igomas took a water wheel and tossed it towards Cosmos, and while the giant managed to evade it, the wheel was about to land on the children. Thankfully, Cosmos saved them in time, and driven by guilt, Igomas pleaded Cosmos to destroy it, for it would be nothing but a burden due to its size. However, Cosmos reverted to Luna Mode and shrank it down to a toy-sized robot with the Cosmo Reductor, and soon after, Igomas was picked up by the trio. In its final moments, Igomas bid them farewell, before deactivating, as the children vowed to one day become scientists and restore Igomas. 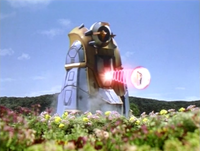 Levitation
Add a photo to this gallery
Robot Form 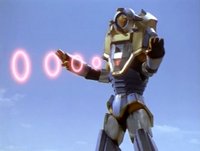 Ring Blasts
Add a photo to this gallery 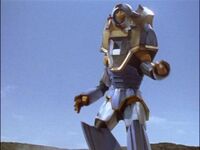 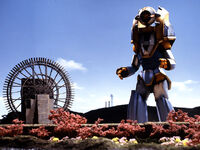 Add a photo to this gallery
Retrieved from "https://ultra.fandom.com/wiki/Igomas?oldid=511125"
Community content is available under CC-BY-SA unless otherwise noted.