Kei Hosogai
Ignis (イグニス Igunisu) is an anti-hero and later ally in Ultraman Trigger: New Generation Tiga. He is a Lishurian treasure hunter who came to Planet Earth for some reason and gets closely tied with GUTS-Select. He eventually gains the power to transform into Trigger Dark.

Ignis is the Latin for "fire".

While he may look human at a first glance, his true appearance shows when he gets excited or emotional.[2][3] An avid collector, Ignis has amassed a multitude of treasures on his journeys through space, and appears to be motivated by his desire to expand his collection with new finds. In his adventures, Ignis often finds himself clashing with GUTS-Select, but at times he is willing to give them a helping hand. He also shows his moments of selflessness, as seen when he returned the Ultra Medals to Haruki despite his interest of said items earlier.

Underneath his adventurous exterior lies a trauma from losing his home planet and is willing to drop his usual character the moment when Hudram (the target of his vendetta) appears. This extends to the point where his assistance to GUTS-Select partially stems from the fact that they share a common enemy, as well as his hatred for planetary-scale genocides after being a survivor of such an incident.

About a century ago, Hudram awakened from his 30 million year slumber. Upon doing so, he headed to Planet Lushuria, massacring the entire population, purposefully leaving only a younger Ignis as the lone survivor of the genocide. The event imprinted itself in Ignis' memory, with him seeking a fight for revenge from Hudram.

Ignis, intending to steal things he deemed to be exquisite, attempted to kidnap Yuna Shizuma at the Shizuma residence, she was the heiress to the Sizuma Foundation. Kengo Manaka and Akito Hijiri fought with him and managed to drive him away. Ignis reappeared when Yuna was caught by Hudram, and saw Kengo transforming into Ultraman Trigger when Gazort attacked. The Ultra-Ancient Light and Darkness He then stole a relic from an Ultra-Ancient ruin. He invaded the Nursedessei intending to steal the Ancient Sparklence, arriving on a broom made from Guebasser feathers. The GUTS-Select members attempt to apprehend Ignis, but Oka-Gubila soon arrived, attracted to a signal emitted by the relic Ignis stole earlier. For Smiles

During the appearance of Satandelos, Ignis worked alongside the GUTS-Select team to deal with the threat, given his hatred for those who harm other planets after what happened to his own. He volunteered himself to leap within Satadelos' shield once it had been breached to plant an explosive on it's shield generator. Upon the successful completion of the operation, Seiya Tatsumi offered Ignis a position within GUTS-Select, which he declined. He soon found himself reflecting on his past once again, considering to himself how he would be able to take his revenge on Hudram if only he had Trigger's power. The One Hour Demon

After Trigger Dark had been defeated by Glitter Trigger Eternity, Ignis managed to absorb his dark essence. The 30-Million-Year Miracle He then infiltrated the Nursedessei and managed to steal the prototype GUTS Sparklence and the Kaiju Keys of Horoboros and Zaigorg after hacking into Akito's computer. The Marked Captain: Detective Marluru's Case File

When Absolute Diavolo and Absolute Tartarus appeared on the Earth, Ignis decided to contact Akito and give him data on them, secretly as "payment" for the GUTS Sparklence he stole. The Golden Threat Ignis, overhearing Ribut's advice to Kengo about unleashing his inner power, did so himself and turned the prototype GUTS Sparklence and a GUTS Hyper Key into the Black Sparklence and a Trigger Dark Key. He then used his new devices to transform into Trigger Dark. Operation Dragon However, he is unable to control the darkness and went on a rampage as a result, fighting against Ultraman Trigger. In his rampage, Ignis also used the powers of the Kaiju Keys he stole, but had run out of energy and disappeared. Their battle uncovered the Metsu-Orga egg lying around nearby.

Still eager for revenge against Hudram, Ignis confronted him and used Trigger Dark's powers once again, fighting against Hudram and Ultraman Trigger, but was still unable to control Trigger Dark. Hudram took the chance to unleash Metsu-Orga on them and flee. Trigger Dark fought until he was defeated by Metsu-Orga's evolved form, Metsu-Orochi. Trigger Dark took control of Ignis once more when he heard the screams of people, reminding Ignis of his past and forcing him to transform. In a fierce battle against Trigger, Metsu-Orga and Carmeara, Trigger Dark took hold of the Circle Arms and attempted to strike Carmeara only to be shot out of the sky. Ignis was then detained by GUTS-Select and had his transformation items confiscated. Sneering Destruction

Somehow, Ignis managed to escape his confinement when Golba II attacked the Nursedessei. Smile Operation No.1 He gave Yuna his Guebasser broom when Barriguiler attacked and challenged her, seemingly out of genuine concern. The Blue One Comes With the Lightning Akito enlisted Ignis' help after he managed to translate the notes left by the ancinet civilization on Aboras and Banila, giving Ignis back his Black Sparklence, since Kengo was trapped in Aboras' foam. Ignis transformed into Trigger Dark, and no longer went berserk after Akito made some improvements to the Black Sparklence. After managing to get Kengo back, Trigger and Trigger Dark teamed up to defeat the two monsters. However, after the battle, Ignis, who transformed into a human-sized Trigger Dark, captured Yuna and disappeared. Demons Rampage Again

Ignis revealed to Yuna and GUTS-Select via a message that wanted to use the Eternity Core's power to revive his race, the Lishurians. However, he also acknowledged that something might happen to the Earth should he use the Eternity Core's power and can't guarantee its safety. He decided to play his last game with the GUTS-Select members since he felt indebted to them, although he masked it in front of Yuna by exclaiming that it wouldn't be interesting if he could just accomplish his objective without any resistance.

At night, Ignis and Yuna open the gate to the Eternity Core after Yuna stood on the same altar that Yuzare used to open it long ago. Ignis also laid a trap that summoned Mecha Musashin, which Kengo somehow activated. When Ignis and Yuna arrive at the Eternity Core, Hudram also appears and takes Yuna hostage. Ignis wanted to leave her for the Eternity Core, but then Hudram provoked him some more and Ignis found that he could not abandon those who he had formed bonds with. Akito appeared just in time to help Yuna get free, and Ignis took the chance to transform into Trigger Dark for his final showdown against Hudram. They fought with Trigger Dark being at a disadvantage until Trigger brought Musashin's katana to Trigger Dark, allowing him to fight with Hudram evenly. Unable to accept that his friends' support made Ignis stronger, Hudram then targeted Akito, Yuna and Kengo for cheering Ignis on, who then shielded them and endured Hudram's attacks. Kengo then gave the Glitter Trigger Eternity Key to Trigger Dark, who blasted Hudram away. Despite having the chance to use the Eternity Core's power for himself, Ignis chose not to and turned away. He and GUTS-Select then parted ways on good terms. Last Game

Soon, Carmeara transformed into Megalothor after reaching the Eternity Core and threatened to envelop the world in darkness. My Friend Ignis joined the battle against her and helped Trigger defeat Megalothor's first form by blasting their Zeperion Beams at her simultaneously, but she survived and counterattacked. Ignis felt that Megalothor's darkness was consuming him as well, so he made the decision to retreat with Kengo, Akito and Yuna. The Ruler of Shadows Ignis and Kengo transformed once again to battle Megalothor in its second form, but found themselves overwhelmed. To make matters worse, the excess energy from the Eternity Core started to leak out and could cause an explosion comparable to the Big Bang, forcing them to retreat once again.

Soon, it was concluded from the previous battle that a power of light and darkness equal to Megalothor's was needed in order to defeat it. To achieve such a power, Ignis transferred Trigger Dark's darkness into Kengo's Multi Type key, creating the Trigger Truth Hyper Key which Kengo used to transform into Trigger Truth for the final battle against Megalothor. While that happened, Megalothor created copies of Darrgon and Hudram from the darkness it unleashed, in order to target Yuna who was concentrating the Eternity Core's energy into the Nursedessei. Ignis joined GUTS-Select in protecting Yuna until she completed her task, allowing them to transfer the Eternity Core's energy to Trigger so that he could finish off Megalothor.

After the battle was over, Kengo returned the dark power to Ignis, who regained the Trigger Dark key once more. Kengo said his goodbyes to his friends before leaving to control the Eternity Core. Later, Ignis left GUTS-Select, looking for another way to revive Lishuria. To the Ones Who Believe in Smiles / Pull the Trigger

Ignis returned to the Earth for a visit but had to transform into Trigger Dark when Zabil transformed into Evil Trigger and Ultraman Z was controlled by Celebro. Ignis was forced to fight the both of them at once until Kengo and Akito managed to reclaim the GUTS Sparklence and Hyper Keys that Zabil stole from him, transforming into Ultraman Trigger. They fought against the other two Ultras until Kengo helped Haruki Natsukawa expel Celebro from within himself, regaining control. The three of then then ganged up on Evil Trigger, who was going mad with his obsession with the "light".

Trigger Dark and Z then fought Destrudos, who was summoned by Celebro, but were starting to get overwhelmed until Yuna gave Trigger a fragment of the Eternity Core at the cost of Yuzare's ring and the Eternity Core's ruins itself but allowed Trigger to become Glitter Trigger Eternity. Trigger Dark and Z fire their finishers at Destrudos and finished it off before helping Trigger fight Evil Trigger, who had grown to giant size because of the overflowing darkness within him. After a short fight, the three of them fired their signature Ultra Beams at Evil Trigger, who shattered into pieces.

After the battle, Ignis left the Earth again to keep looking for treasures throughout the universe. Ultraman Trigger: Episode Z

Ignis converts the Black Sparklence into its Sparklence mode, loads it with the Trigger Dark GUTS Hyper Key, and by pulling the trigger with the device held skywards he transforms into Trigger Dark.

As a treasure hunter, Ignis has acquired a variety of exquisite items, these include: 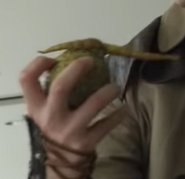 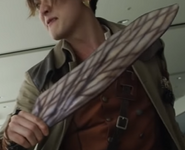