Mirrorman episode 49 "A Strike Of Fury"

One day Yasuda detected a space ship over the First Space Defense Base and ascended rapidly. Before long the flying saucer fired a machine gun from its underside to assault the base. Jumbo Phoenix soon arrived, the Invader saucer barely distracted from its goal. During the attack Fujimoto was injured from a direct hit by the machine gun with Yasuda shooting at it back. On the ground the flying saucer left the monster Iezu to finish the job. Iezu quickly shot down Jumbo Phoenix and proceeded to walk toward it. Kyotaro drove to the scene and turned into Mirrorman using his car's mirror. The hero was quickly ensnared by Iezu's tentacles, but retaliated with a flying kick. The Slicer H was then used to cut off the alien monster's tentacles, but these tentacles defended the main body as Mirrorman relentlessly attacked Iezu. Mirrorman was stunned once the four tentacles drained his beam energy and they reattached to Iezu's body. Mirrorman attempted to use the Mirror Knife and Silver Cross, but was unable to. Mirrorman was forced to retreat as his timer went off, allowing Iezu to continue rampaging through the base before burrowing underground.

The next day an earthquake was detected at the Second Space Defense Base, Dr. Mitari believed it was caused by Iezu. During this the Invaders taunted Kyotaro and dared him to fight once more. Iezu surfaced and attacked the base. Phoenix 2 and Phoenix 3 quickly showed up, their missiles doing little to stop the monster. Kyotaro drove to the scene only to be attacked by Yasuda's sister, Aiko, who was possessed by an Invader. He quickly knocked Aiko out and became Mirrorman once more using her knife. The hero's beam energy returned, this time using the Slicer H and Mirror Knife in combination to destroy the four tentacles. Mirrorman then used the Horizontal Cut to decapitate Iezu and destroyed the body with the Mirror Fire. 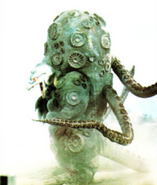