Idatenran's name comes from the combination of Idaten (韋駄天, Idaten) and the transliteration for the English word "run". Idaten is the Japanese name for the Buddhist mythology deity, Skanda, who is known for chasing down speedy demons to recover stolen relics.

The monster lived for an indefinite time among humans. He was a peaceful monster that ate radishes and turnips and once a year it takes a form of a boy and his only desire is to run in its highest athletic powers. The monster then decided to join a marathon in Japan which Idantenran was greeted with a school principal and asked him to join the school but really was a scheme for the principal to earn money off of him, then kids Idantenran wanted to befriend started to bully him which caused Idantenran to go to his monster form. Takeshi felt awful that UGM wanted to kill the peaceful monster, so Takeshi turn into 80, interrupting Idantenran's first attack by telling him to go back to Death Mountain, but he refused and reverted to his human form. Then when the school principal tried to sabotage the marathon to let Idantenran win, the dog then bit the monster instead provoking it to transform into its monster form! The monster, although seemingly weak in power, soon proved itself to be damaging to its surroundings with the sheer speed it can travel. Ultraman 80 was eventually able to stop it's out of limit, speed rampage. Resolving the combat without fatality to the creature and allowing it a second chance to fit in society as a man. 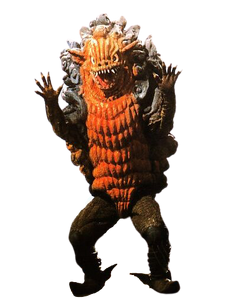 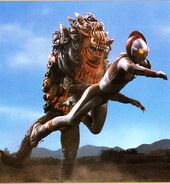