I Saw a Bird

I Saw a Bird

I Saw a Bird (鳥を見た Tori o Mita) is the twelfth episode of Ultra Q.

A strange occurrence at the zoo has caused the animals to disappear and has left the zoo keeper near death. Gasping his last breath, the dying man murmurs, "I saw a bird". At a peaceful fishing village, a 10th-century sailing vessel mysteriously drifts into port. Upon investigating, Jun and the others find the ship to be completely deserted, but discover the navigational log and a small, white bird. Without warning, the ship begins to crumble around them and the group flees, taking along the ship's journal. The ship is lost beneath the waves and the small bird flies away. Back in Tokyo, Dr. Ichinotani determines the ship's log to be 998 years old; oddly enough, the final entry reads "I saw a bird..." Adding to the mystery, the small bird that was discovered is identified as an extinct species of prehistoric bird called Larugeus. In the meantime, a young boy from the village named Saburo befriends the small bird and names it Kuro (an ironic name for a white bird, as kuro means black in Japanese). Shortly after the bird's appearance in the village, a large flock of chickens are missing. Believing the bird to be dangerous, the local authorities capture and hold it in jail. Larugeus grows to gigantic proportions, breaking its bonds and causing widespread destruction to the city as it flies away. Saburo catches sight of the departing Larugeus and bids the bird farewell. 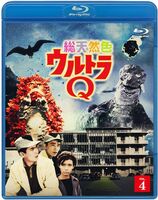