Ultraman Ginga (Cameo)
Hydra (ヒドラ Hidora) is a supernatural Kaiju that was apparently awakened by the soul of a child who was killed by a careless driver. It attacked several motorists before being countered by SSSP and eventually Ultraman. Ultraman attempted to stop Hydra from attacking anyone else, but the monster easily evaded his attacks, and the hero simply opted to allow Hydra to leave on his own accord.

Years ago, a young boy named Akira was killed on Route 87. Afterward, the SSSP was visited by a young boy declaring that the mythical dragon Hydra would be arriving soon. Just as the Science Patrol investigated strange lights around the tip of a mountain, they discovered that the boy whom was killed had created the Hydra as for a park. Soon the Hydra breaks out of the mountain, roaring the world and vowing to get revenge on the motorists that had killed Akira. The beast leads a path of destruction, attacking vehicles on the road.

The Science Patrol manage to fight back, deploying powerful laser weapons against the creature. A blast to its chest manages to rip it open, but this only enraged the winged monster. As it approached, Hayata transformed into Ultraman. The two forces clashed, but Hydra managed to dodge Ultraman’s Spacium Beam. As Ultraman’s energy began to run low, the monster began to fly away. Watching on, Ultraman allowed it to escape as the spirit of Akira appeared on its back. The monster was never seen again.

Figure of Hydra, created by Bandai. 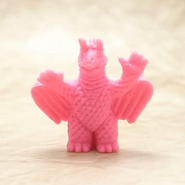 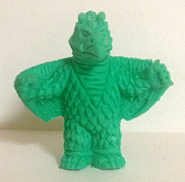 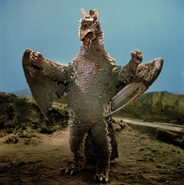 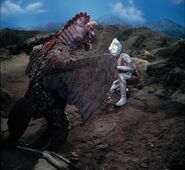 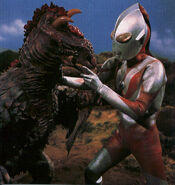 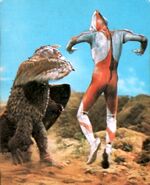 Hydra in a stage show 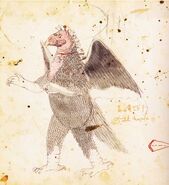 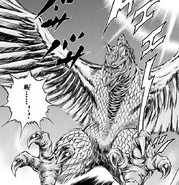 Hydra vs. Dodongo
Community content is available under CC-BY-SA unless otherwise noted.
Advertisement