Masahiko Tsugawa
Hotsuma Raido (礼堂ホツマ Raidō Hotsuma) is the grandfather of Hikaru Raido. He is a priest who tended the Ginga Shrine where the Ginga Spark rested for untold centuries before the start of the series. For unknown reasons, he also has the Mark of Courage on the back of his right hand that Hikaru has. He also knew who was Ultraman Taro, "Ultraman No. 6", despite him meeting the Ultra for the first time. He does not answer Taro when Taro asks him why.

Hotsuma, aside from tending to the new Ginga Shrine at the school, occasionally observed Hikaru's fights as Ginga. He had his suspicions right from the start that Principal Kyoko Shirai had the darkness about her, but could not get any proof.

During the fight against Super Grand King, Hotsuma confronts Principal Kyoko and confirms the presence of Dark Lugiel possessing her, bringing her to a room where presumably all the remaining Spark Dolls were kept behind curtains. Explaining that Dark Lugiel took advantage of the turbulent emotions in her heart, he then proceeds to purge Dark Lugiel's influence out of the Principal successfully after a struggle. He is seen exhausted from his efforts.

In the final episode, he is shocked to see Kyoko still wielding the Dark Spark. He tries but fails to contain the darkness within her and faints. Later, he is seen singing the Furoboshi School's song with the others and likely wielded a Ginga Light Spark as well to revive Ultraman Taro. He then observes the final battle, later bearing witness to Ginga's departure from Earth. 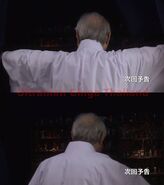 Hotsuma pulls back the curtains to reveal the remaining Spark Dolls