Hotarunga (ホタルンガ, Hotarunga) was a Terrible-Monster that appeared in Ultraman Ace episode 17, created by combining a firefly with a space monster.

A girl named Damiko was approached by Yapool, who promised her that she would see her mother. She was then hired to become the She-Devil. TAC wondered if this act was to stop their V7 missile plan. The fireflies which appeared to weaken Houkuto and Minami were drawn by the She-Devil. Minami befriended Damiko and tried to watch over the paraplegic girl. One night, Minami was suffering under the fireflies. Minami broke the bond between the She-Devil and Damiko. Damiko was able to walk and told Minami that Yapool can let her see her mother. Yapool told Hotarunga to come to his orignal size and stop TAC's V7 plan. Hotarunga did so and sucked Damiko and Minami in his abdomen. TAC saw Hotarunga and began attacking. After TAC sprayed a gas on Hotarunga, he ejected Minami and Damiko. Hokuto and Minami became Ultraman Ace and decided to fight Hotarunga. The acid that the Terrible-Monster sprayed seemed to take effect at first, but Ace managed to get the upper hand. After a lengthy battle, the TAC fired their missile straight at the giant firefly's forehead. Hotarunga was finished off by Ace's Metallium Ray.

Acidic Mist
Add a photo to this gallery 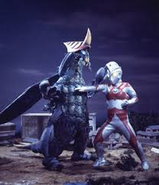 A figure of Hotarunga
Add a photo to this gallery
Retrieved from "https://ultra.fandom.com/wiki/Hotarunga?oldid=497911"
Community content is available under CC-BY-SA unless otherwise noted.