None
Hophop (ホップホップ Hoppuhoppu) was the guardian monster of codenamed Adam and Eve (アダム とイブ Adamu to Ibu). They appeared in episode 35 of Ultraman Max.

When an alien world within Nebula M32 was destroyed millions of years ago, Hophop and two children somehow escaped and were flung across the universe. The people of that world saw their end and created Hophop to act as the guardian of two children who would rebuild their species elsewhere in the universe. For eons the guardian and its children traveled until Earth’s gravity pulled them in. As the atmosphere evaporated the ice that encased them, the guardian and the two kids were separated and landed in different locations. While the children were recovered by a young boy, Hophop was carted off to a research facility where her body was discovered to be more suitable for Venus than the Earth. It didn’t take long for Hophop to awaken and go on a rampage, smashing through the complex and laying waste to anything before it in search for its missing charges. Team DASH tried to attack it, but its body was super heatconductive and set fire to its surroundings and launched its own counterattack against the DASH Birds. Kaito and Mizuki eventually managed to find the two children who had adopted Hophop's charges, but it was too late to stop the rampage. Ultraman Max had to be summoned into battle. The adult fought hard against the hero that wished it no harm. Latching onto his arm and his head with its duck-like bill, Hophop forced Max down. When attempting to use the Maxium Sword, it bounced right off its armor plates, doing little more than aggravating the already angry guardian, but the end of the battle was near. When managing to push Hophop back, Max recovered the babies and showed them to the caretaker. Hophop was instantly calmed as its children flew to it. It laid on the ground, allowing Ultraman Max to hoist it into the air and take it to Venus where its children would act like the Adam and Eve to a brand new world for their kind. 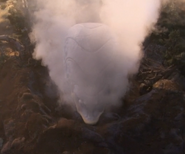 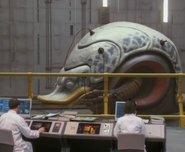 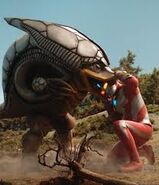 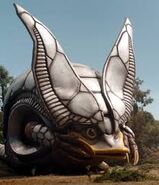 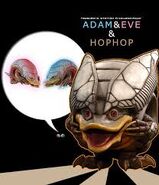 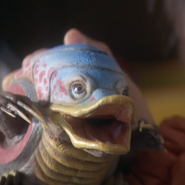 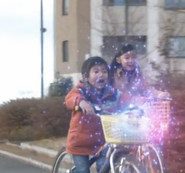 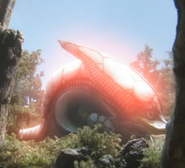 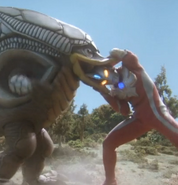