"That's the voice of your heart. You created that monster in your dream. It absorbs your Minus emotions like hatred and sadness and its out there, crying. You love someone, so you want them to love you too. If you don't, then you get angry. But is love really something so stingy?"

Hoe (ホー Hō) is a Kaiju who first appeared in episode 3 of Ultraman 80. The first Hoe came into existence because of the negative emotions of a heartbroken teenage boy. He then proceeded to rampage across the city until he was finally vanquished by Ultraman 80. The second Hoe rose during Ultraman Mebius' time, this time spawned by the sadness of multiple students whose school was about to be demolished.

After a teenage boy had his heart broken, Hoe was created by the negative emotions he was feeling. Hoe began to ravage the city around him as he acted wildly. UGM (Utility Government Members) arrived to the scene, but their fighters were no match for Hoe's heat stream. After the young boy passed out Yamato turned into Ultraman 80. Hoe began to mercilessly beat down 80, but the hero never gave up as he tried his best to beat down the negativity kaiju. The Succium Beam was used, but Hoe had a natural resistance to beams. 80 tried the Buckle Beam, this time reducing Hoe to nothing. First-Love Monster

After the announcement of their school being scheduled to be demolished in the coming weeks, negative energy was created by the sad atmosphere given off by the students of Takeshi Yamato during its final reunion. This energy materialized had branched out, forming the monster Hoe. As it threatened to destroy countless lives, Mirai transformed into Ultraman Mebius, but he and Hoe were evenly matched. GUYS attacked with their wing fighters, but their attacks simply passed through its minus energy body, making the situation more serious, worse when Hoe pinned Mebius and began to cry his acidic tears on him.

Called forth by the presence of Negative Energy on Earth, Ultraman 80 arrived on Earth to deal with the monster. After a short fray, Hoe looked towards the sky, longingly desiring to leave Earth. 80 used his Buckle Beam on Hoe, transforming him into energy, and the Kaiju flew into space. Teacher's Memories

Hoe returned in the film Mega Monster Battle: Ultra Galaxy Legends The Movie as one of Ultraman Belial's 100 Monster Army. He was first seen as a spirit in a shot of the Monster Graveyard along with Fire Golza, King Pandon, Zoa Muruchi, and Froguros (B). He was then seen rising out of the ground along with Red King, Eleking, King Guesra, Tyrant, Gudon, and Banpira. He then teamed up with Alien Reflect, Tyrant, Galberos, Vakishim, and Sadola to take down Litra. When Rei and his Gomora went beserk thanks to Belial, he and the other surviving monsters stood back to watch Gomora fight the Ultras. He was killed by Ultraman Zero's Emerium Slash when he arrived along with Roberuga II and Kelbim.

In episode 7, Hoe, along with a lot of other monsters, are seen cheering on Ultraman Ginga as he fights Dark Galberos. He most likely returned to his original form after Ginga's victory. 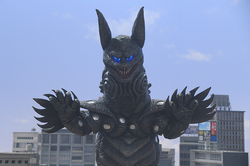 Hoe's appearance was foreshadowed by visions seen by a special girl named Haruka who worried that the monster might appear from a fog and defeat and kill Ultraman Orb.

Soon afterwards, Hoe appeared for real after a fog consisting of Minus Energy enveloped the town and the monster soon began to go on a rampage destroying a lot infrastructure after it absorbed the Minus Energy to use his energy attacks on them. According to Gai Kurenai, the monster appeared because of Haruka's sorrow and despair to prevent the future from changing due to her psychic ability. The wanderer then transformed into the Ultra in his Burnmite form and began to fight the monster. Even though it stopped to cry at the beginning of the fight, Hoe got the upper hand in combat and was going to kill Orb by repeatedly stomping on him.

However, after hearing words of encouragement from Haruka (who was watching the battle and finally snapped out of her depression thanks to some words of encouragement from Gai and Naomi), Orb threw the monster away from him and seemingly killed Hoe by using his Stobium Dynamite. But Hoe just reappeared behind him and fired another Hoe Flash at him, which Orb dodged. Orb then turned into his Spacium Zeperion form and saw it shed a tear once more. In Hoe's final moments, it stood completely still as Orb fired his Sparion Beam at Hoe transforming him into pure energy and then disappearing for good. A Future Shrouded in Fog

During episodes 12 and 13, Hoes are created from an environment that surrounds a broken up couple. At the same time, a Lunaticks is seen attacking the city, provoking the Hoes to merge into a giant Hoe and battle the Lunaticks. Ultimately Lunaticks is seen into retreating, but Hoe turns his rampage on the couple who created him and attacks them too. After the couple rekindle their relationship during the fray, Hoe vanishes, now that the negative energy has been purified.

Hoe reappeared in the puzzle role-playing game for mobile devices, Ultraman Galaxy as a UC (Uncommon) card that you can unlock him in one of the levels in the game with a rare chance of getting Hoe. 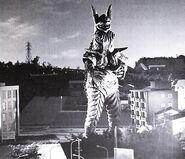 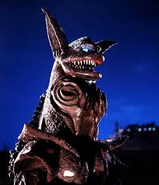 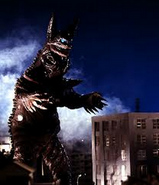 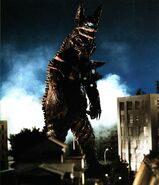 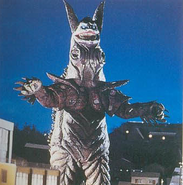 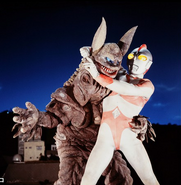 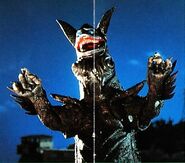 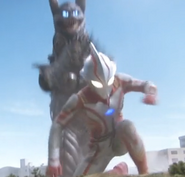 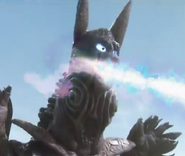 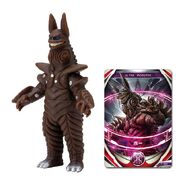 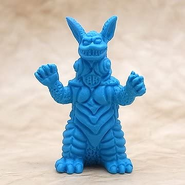