Ultraman Ginga S episode 6 "Past that was Forgotten"

When Hiyori was a child, the Victorians had a civil war over the use of the Victorian stones. Her father/grandfather was a member of the sect that wished to use the Victorium stones instead of sealing them away and held the Victory Lancer. Hiyori was also good friends with the monster Shepherdon and lived through the conflict that nearly destroyed her people. In the end her father's sect was defeated and though a child, she and her father were cast out of the Underground realm of the Victorians and sealed in another Dimension. All of her comrades died over the years leaving her as the last living member and causing her to hate the other Victorians. How she escaped the other dimension is unknown.

Allying with Exceller, Hiyori was granted a Chibull Spark and the Gomora doll to kill Victory's host, Sho in exchange. She first appeared in the woods ambushing Hikaru Raido and Sho, she fights them and steals Sho's Victory Lance and fired at him, she then Monslived into Gomora. Without the Victory Lancer, Sho could not transform, leaving Hikaru to fight alone as Ultraman Ginga. Before she could finish off Ginga however, Hiyori heard Shepherdon's cry then suddenly transformed back and teleported away before Sho could catch her. She returned to Alien Chibull Exceller's Space Base where she had an argument before departing with the Gomora doll once again.

Hiyori then returned, already transformed into Gomora and faced Ginga again. They brawled with Gomora getting the upper hand by beating Ginga into near submission. Ultraman Ginga then transformed into his Strium form but as Ginga attempted to defeat Gomora with his Strium Ray, Shepherdon rose to the surface to protect her, taking the blow in the process. Then Fire Golza appeared, Monslived by Android One Zero, to assist Hiyori but before they could finish off Ginga, Hiyori had a change of heart and fired Gomora's Oscillatory Wave at her. Fire Golza then knocked her down, but after being protected by Ginga and Shepherdon, she got back up and tried to attack Fire Golza with Gomora's Mega-Ton Tail but Fire Golza grabbed it at the last second and tore it clean off. Even though it started to constrict around Fire Golza's neck, Hiyori was defeated by, by having her own tail slammed against her, Fire Golza's beam but not before Hiyori threw the Victory Lancer to Sho. Afterwards Hiyori met with Queen Kisara via a hologram and was allowed amnesty for her current crimes and those of her tribe, being allowed back into Victorian Civilization. On the way down with Sho, she tried one of the chocolate treats she saw Sho and Hikaru eating.

She later appeared with the others to help Hikaru and Sho in their time of need against Dark Lugiel and helped defeat several Chiburoids. 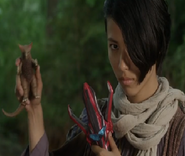