Ultraman Wiki
Register
Don't have an account?
Sign In
Advertisement
in: Human Characters, Heroes, Other Heroes,
and 4 more

Hime Kudzuki was a normal girl who felt that she had a mission to protect Tsutsujidai from an alien invasion; but one fateful day a falling star fell on her. She was not killed or injured, and whatever should have fallen simply disappeared. An out-of-control truck had almost killed her, but she was saved by a strange man who sliced the falling debris in half. In his presence, Hime could suddenly see monsters in the scenery. The strange person informed her that danger is approaching, before they both left to her house, with Calibur not fitting through the doorway because of his swords.

Much to Hime's surprise, Calibur grabbed her while she was still showering and carried her to a cafe where a monster was rampaging. Unable to fight it himself at this point, Calibur saw Hime's desire to protect her friends and gave her one of his swords, allowing her to transform and defeat the monster. Princess and Samurai

However, everyone else but Hime and Calibur forgot those events and life resumed as usual. Calibur showed up at Hime's school, making her run out to confront him before the both of them had a conversation about the power that they shared. They noticed they were being watched by a girl wearing the same school uniform as Hime, but was unable to recognize her even though she remembers all the faces of everyone at her school. Thinking she may have something to do with the incoming danger, they chase her down but lose her in an arcade, which bans people from entering after 5pm if they are not yet in high school. Asking an older girl for help, Hime manages to enter the arcade just in time for a monster to attack, managing to defeat the monster and protect the girl she was chasing. After she defeats the monster, the area is covered in fog and the arcade is fully repaired. Nobody seems to remember what had just happened except for the two of them. The strange girl introduces herself as Akane Shinjo. Rescue and Throbbing 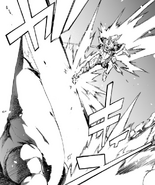