None
Himala (ヒマラ Himara) is an alien that first appeared in Ultraman Dyna episode 12.

Himala come to Earth and landed on a tower in a city. Falling in love with Earth's scenery he resolved to steal entire town for his personal collection. After sending a message to Super GUTS, declaring ownerships of 'All the Towns', he stole three town using his red sheets. Later, when Super GUTS discovered his hiding spot, they head to his tower to investigate. While there  they discover a black box with three drawers containing the stolen towns. Himala grew large and terrified Super GUTS member Kohda and Nakajima who held the box. Later, Asuka transformed into Ultraman Dyna and fought Himala in pocket dimenion that he had created and defeated him, causing all the missing areas to be teleported back to where they were stolen from. In the end, Himala was forced to retreat. 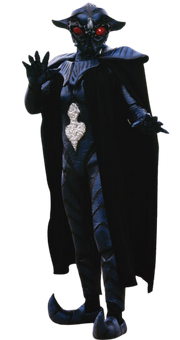 Himala in a stage show
Community content is available under CC-BY-SA unless otherwise noted.
Advertisement