―Ryu Ibuki and Go, The Monster User and the Boy.

Hideki Go was a young race car driver who died while rescuing a little boy and a dog from falling rubble caused by a fight between Takkong and Zazahn. His valiant sacrifice is noted by everyone, even his friends and the new defense force MAT, but an unseen being also took notice. Looking over him was Ultraman Jack, who was so touched by his heroics that he decided to merge his own life-force with Hideki's, thus bringing him back to life (just like the original Ultraman did with Shin Hayata), much to everyone's astonishment. MAT asked him to join the team, to which he agreed, especially since, in this frightening new "Age of Monsters", the Earth would need a savior. In times of crisis, Hideki Go would raise his right arm, and by force of will, transform into Ultraman Jack to fight monsters.

In the middle of the series, Alien Nackle, an evil alien, killed his lover, Aki Sakata. Once Go heard the news and arrived at the hospital, he only had enough time to see her die in front of his eyes. Even worse, his comrades from MAT had been hypnotized into Nackle's slaves. Go/Jack was captured and prepared for execution at the alien's homeworld. However, Jack's brothers, Ultraman and Ultraseven, appeared and rescued him. Jack/Go gave a salute to his comrades before taking off back to Earth. However, upon returning, Go was seized by MAT comrades, who'd all been placed under Nackle's Mind-Control. Go managed to escape, and he quickly made his way to Black King and Alien Nackle for one final fight. Go became Ultraman Jack again, but Nackle and Black King were still be too strong for him to beat. During the fight, Jack managed to destroy the mind-control Dish, freeing MAT from Nackle's control. Receiving support from his fellow MAT members, Jack fought back with much strength. Jack managed to kill Black King by decapitating him, leaving Nackle all alone. Jack then grabbed Alien Nackle, tossed him up into the air, and slammed him down onto his head, severing the alien's spine. At death's door, Nackle then warned Jack that one of his weapons was still remaining and would destroy Japan and he laughed before dissolving away.

When Alien Bat entered Go's dreams, he began to have nightmares about Zetton, a monster that nearly killed the original Ultraman, affecting both Jack and his host mentally. Once Bat made himself known, he revived Zetton to terrorize Tokyo while keeping Go's friends hostage by having Zetton hold them. Jack put his life on the line to save Go's friends, and after impaling Bat with the Ultra Lance, Zetton was quickly taken down. Go was moved to his new home M78 after Alien Bat's invasion ended, with Go going along, since the Ultra had became his surrogate life. Afterwards, Jack/Go returned to Earth to help other Ultras in their time of need.

Although not appearing in the series, an impostor of Hideki Go, disguised by Alien Antira appeared in episode 10. After Antira is defeated, the real Go appears to Jiro at night as an image, smiling at his adoptive little brother, before vanishing.

In episodes 33 and 34, he returns with Shin Hayata, Dan Moroboshi, and Seiji Hokuto. The group gathered for a celebrative barbecue with Kotaro Higashi and Zoffy in human hosts. Unfortunately the Ultra Brothers' celebration was interrupted by Alien Temperor. For a time the Ultras switched hosts. Eventually they transformed and defeated the evil invader and returned home.

In episode 52, he makes a return, and transforms into Ultraman Jack to offer the marauding monster Dorobon his Color Timer in exchange for ZAT's sub-captain. As a result, Jack (and by extension, Hideki)'s sacrifice was a pivotal moment in Taro's fight against the alien monkey, and turned the battle in Taro's favour after Dorobon began to lose power from Jack's stolen Color Timer. After Dorobon was defeated, Jack and Hideki were revived.

Hideki Go appeared on this series to fix Dan Moroboshi's Ultra Eye and give him a new capsule monster Sevenger. However, when Ultraman Jack was flying he got stopped by Ashuran. The two quickly went into battle but Ultraman Jack accidentally brought him to Earth.

He later transformed to help Leo fight the two-faced monster. After Ashuran was defeated, Go, with the Dan's damaged Ultra Eye on his hand, went back to Nebula M78.

"Even if there is only the slightest hope of victory, fight believing that you will win."

―His words to Ultraman Mebius before transforming

Hideki Go appeared in episode 45 of the Ultraman Mebius series. He meets Mirai when he was depressed by how the public turned against his friends for being unwilling hostages. Hideki/Jack convinced him to not give up his faith in humanity. When Deathrem attempted to destroy Crew GUYS, Hideki transformed and protected them for Mebius. In the episode, he was usually seen driving a jeep. At the end of the episode, he was speaking telepathically to Ikaruga George.

An alternate reality version of Hideki Go appears in Great Decisive Battle! The Super 8 Ultra Brothers as Ultraman Jack's human form. Along with the other Ultra Brothers hosts and human forms, Hideki was a normal human being with a wife and daughter running an Car Repair Garage. Good friends with the other three Ultra Brothers' hosts he was close with Daigo, Gamu, and Asuka. Sometime into the movie after meeting up with Hayata, Dan, Go, Hokuto, their families and Daigo as well as Asuke and Gamu at Dan's restaurant, the seven men take a walk together. As they do, a mysterious cloaked being knocks out a person driving a truck, making it head right towards a group of kids. Before the truck reached them, however, Hayata, Dan, Go, and Hokoto rescue the children and stop the truck with amazing speed. The mysterious being, however, laughs at this and vanishes. Daigo begins to think again that they could be actually Ultramen, but once again dismisses it. A day later, when King Pandon attacks the city during his Fight with Mebius, Go's wife is injured while protecting an old man from falling rubble, leaving her in a coma and Go emotionally crushed. Later on, after hearing Rena's message on the Radio, Go goes with the other Ultra Brothers and encourages Daigo, who turns into his Ultra form, along with Asuka and Gamu. When the three seemed to be losing, by the words of their wives and the thoughts of their loved ones, Go and the other Ultra brothers transform and revive the petrified Mebius. The eight Ultras proceeded to destroy Giga Khimaira. Later, when the dark wizard appeared, Go and the other Ultras went into Glitter Mode and destroyed the entity of minus energy. Afterwards, in human form, the group are met by their families who tell Go that his wife was out of critical condition and had awoken. After Mebius had returned home, and Daigo, Asuka and Gamu had achieved their dreams, the seven heroes and their families head off to the Nebula M78.

Hideki appeared in the Ultraman Saga movie with Dan, Seiji, Hayata and Gen, each serving as the mouth piece for their Ultra counterpart. They met in the land of light when Seven/Dan noticed that Zero had just moved to another universe. While they questioned why he would do that they also noted that something was going around different universes and taking monsters, even some from the Monster Graveyard. They noted that it was a powerful source of minus energy and that unfortunately they could only monitor a few of the countless alternate Space-Time zones.

In a deleted scene, Jack and the other Ultra brothers would fly to the alternate Earth to assist Ultraman Saga against Alien Bat's monster weapons. Jack would face his old enemy Black King again and defeat him with the Ultra Lance.

Willpower: Unlike most Human Hosts, Go does not need a transformation device to transform into Jack. All he has to do is focus his willpower to transform, this is usually accompanied by the lift of his right hand. However, Jack can interrupt the transformation if he feels that the situation is too dangerous. 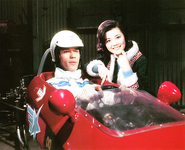 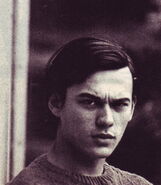