Heller (ヘラー Herā) is a villain from The☆Ultraman. He is an exile from Planet U40 and leader of the Heller Empire.

The leader of Heller Army, Heller was an Ultra who proposed to use the powers of the Ultra Mind to conquer the universe, and acquire eternal life, content in his belief in their superiority. This idea was outright rejected by the ruling body of U40 and Heller was elected to leave U40 along with some three thousand other like minded individuals. Stripped of their Beam Flashers and direct link to the Ultra Mind, what powers they maintained were used to make themselves biologically immortal (they didn't age) and they proceeded to create a fleet of robots, starships and monsters using their advance Ultra Science, forging an empire beyond the Dark Nebula. They later attempted to attack U40 but were repulsed althought they managed to steal the Ultra Mind. They instead turned his attentions to Earth as part of ploy to ultimately defeat the Ultras knowing they monitored the planet and its inhabitants. Heller's second in command Roygar was put in charge of the Earth invasion and when he was later killed the conflict escalated into all out war between him and the people of U40. Somehow he captured the great elder and later the science guard on his base planet. He digitized the elder into a data card to learn his secrets of the Ultra Mind and attempted to have the team executed, knowing one of them was host to Joneus. However, Joneus was summoned and assisted by Elek and Loto who brought his then flying base crashing down. Joneus himself punched Heller at giant size, knocking him out and leaving him to his end when his spaceship was destroyed just as he regained consciousness. 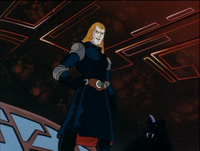 Heller with his pet Panther

Heller in his early days on U40