Hellberus' design motif is based off of Sengoku-era Warlords, specifically Sanada Yukimura when donning his red armor, due to its color scheme.

Hellberus were monsters known for having the reputation for being the strongest in space. One was deployed by Alien Sran to defend Maga-Orochi's egg on Planet Mikarito from being destroyed by Ultraman Max and Ultraman Ribut. When the egg itself grabbed Max and started to infect him with Gudis Cells, Hellberus delayed Ribut's attempt to save Max.

Upon Ribut's return to Mikarito with the antibodies needed to cure Max, Hellberus fought against Ultraman Powered, who had accompanied Ribut along with Ultraman Great. With Max rid of the infection, Powered finished off Hellberus with his Mega Spacium Beam. Ultra Galaxy Fight: The Absolute Conspiracy

Another Hellberus was summoned by Kirisaki to Earth in order to lure out Ultraman Taiga. Upon being summoned, it rained down spike projectiles on Zegun and a Young Mother Zandrias, who were fighting in the city. Hellberus then used its spiked tail to impale and destroy Zegun before descending. After which it attacked Zandrias using its tail, Hell Slash and fireballs, setting ablaze the building that Hiroyuki Kudo and Baby Zandrias were in. Desperate to save the life of Baby Zandrias, Hiroyuki's wishes were heard by Ultraman Taiga, who allowed him to transform and fight against Hellberus. It was a fairly easy battle for Taiga, who managed to beat Hellberus down while blocking most of its attacks. Taiga then fired the Strium Blaster at it, but it survived. Then, using the Supreme Blaster via the Orb-let, Taiga finally finished off Hellberus and gained its ring in the process. Buddy Go!

Hellberus returned when Kirisaki summoned it from its Kaiju Ring to stop Ultraman Fuma and Ultraman Titas from reaching Taiga, who had been corrupted by Ultraman Tregear. However, Titas, Fuma and Hiroyuki had managed to rescue Taiga from the darkness, granting him his newest form - Tri-Strium. Using the Taiga Tri Blade, Taiga finished off Hellberus using the Titas Burning Hammer and regained its ring. We Are One 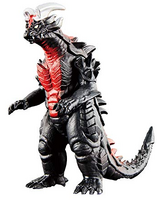 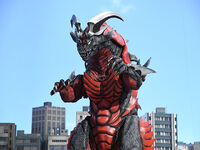 Retrieved from "https://ultra.fandom.com/wiki/Hellberus?oldid=522604"
Community content is available under CC-BY-SA unless otherwise noted.