None
Hella Umaya (ヘラ・ウマーヤ Hera Umaya) was a Kaiju that appeared in The☆Ultraman.

Hella Umaya was a beast used by the Heller aliens to guard their fleet on their base on Saturn's moon of Titan. Once the Scientific Defense Guard attempted an assault on the base, Hella Umaya was sent to attack. Choichi turned into Ultraman Joneus to stop Hella Umaya only for the monster to use his brute strength to over power the hero. Due to Choichi being shot in the right shoulder a short time earlier, Joneus was barely able to hold his own against the titanic brute. However, the U40 fleet arrived to destroy the Heller base with Elek and Loto going to assist Joneus. While Joneus went after the Heller commander both Ultra warriors destroyed Hella Umaya seconds later. 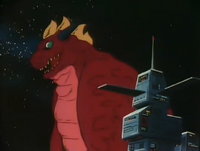 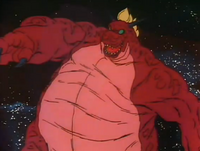