Hectore (へクトール Hekutōru) was a bulldozer-like weapon machine that was over taken by the Liquid Monster. Its only appearance was in in The☆Ultraman episode 11 "The Science Garrison's Challenge!".

The pinnacle of man’s construction equipment, Hectore was the greatest and largest one-man vehicle ever made. Used to go through even the biggest of mountains, Hectore was assigned to a remote part of Japan where a strange purple fluid infected it. The strange organism gifted the machine with a life of its own and turned it into a rampaging murderer and let it loose on a small town where it tore everything apart and left nothing standing. It didn’t take long for the Science Garrison to get involved and soon drew it out of the caves and into the open where they lead a new attack.

Nothing could stop it. Choichiro Hikari became Ultraman Joneus, but even his great strength wasn’t enough to overpower Hectore. The machine caught the hero with its shovel-like arms and began to try and drill through his body. As Joneus’ power began to run low, the garrison made a new attack and began to shower the gigantic bulldozer with flames, forcing the Liquid Organism inside to leave the machine. Freed, Joneus obliterated the purple entity and left the machine in the capable of hands of its original operators. Without the killer creature controlling it, Hectore returned to its construction site, ready to finish the job. 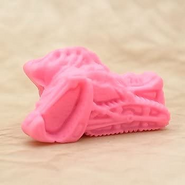 A Hectore eraser, note the Liquid Monster on it's left side.
Community content is available under CC-BY-SA unless otherwise noted.
Advertisement