Official profile
Instagram
Hatsunori Hasegawa (長谷川初範 Hasegawa Hatsunori) is a Japanese actor, voice actor, narrator and singer. He starred in Ultraman 80 as Takeshi Yamato and Ultraman 80's voice actor. He is part of the talent agency K Dash and is called by the nickname "Chopin".

He was married in 1984, and has one son. He said that among his hobbies are listening to music (Jazz, Rock, Opera, Blues and Classical), watch movies, skiing, boogie boarding, camera, travel. He is a fan of the rock band the Rolling Stones, and John Lennon. His favorite movie is The Last Samurai.

He also participated in other sports such as Shooting, Basketball, Karate annd Ski.

This section here refers to Hatsunori Hasegawa's grunts being reused per stock footage on other Ultraman Series: 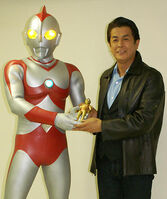 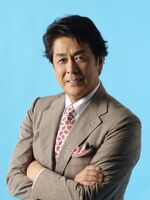