Kohshu Hirano
Soma Ueno (Childhood)
Haruki Natsukawa ( Natsukawa Haruki)[1][2][3] is the main protagonist of Ultraman Z and the human host of the titular Ultra Hero. He works as a rookie pilot in STORAGE.

Haruki is polite and a natural-born athlete. He faces everything head-on and has an extremely strong sense of justice. Although he holds conflicting ideas about "lives to be protected" and "beings to be killed", he continues to move forward while fighting together with Ultraman Z.

When Haruki was still in his elementary school years, Giestron attacked at his hometown for some reason. His father went off to help other people, but never came back and lost his life in the process, leaving Haruki's mother to raise the boy by herself. The incident haunts Haruki to this day.

Haruki was eventually employed at STORAGE, and is the latest addition to the team. While assigned to pilot Sevenger, Haruki was killed in a battle against an extraterrestrial monster, but Ultraman Z arrived and bonded with Haruki to revive him, after which they both defeated the monster. Chant My Name!

Haruki met with Riku Asakura, who chased down Gillvalis to Earth, cooperating with him to defeat it. After the battle, Riku explained who he was and that he was investigating the Devil Splinters, which Z never told Haruki about. The Man Returns!

Later on, Haruki went to rescue Riku when he was abducted by the Valis Raiders under Celebro/Shinya Kaburagi's control, to extract the Belial Factor from him and create the Belial Medal, allowing the villain to transform into various Belial Fusion Monsters. After defeating them with the help of Ultraman Zero, Haruki sent Riku off, as he went to fight other monsters rampaging throughout space because of the Devil Splinters, and made a promise between each other to continue to protect the Earth. His Majesty's Medal

Red King A appeared while Haruki went back to his hometown on the anniversary of his father's death. He fought Red King as Ultraman Z and killed it, before Red King B appeared as well. Haruki realized that they were simply protecting their egg from human activities, and suffered from guilt from his previous killings as a result, having been reminded of his own father's deeds. He protected Red King B and its egg from King Joe STORAGE Custom's Pedanium Particle Cannon and allowed the monster to retreat underground. What Must Be Defended

Still being affected by his trauma, Haruki was also hesitant to fight against Grigio Raiden, when he saw it crying in pain from being modified into a biological weapon. This causes him to lose his fighting spirit and be defeated by the monster twice, while Yoko killed it using King Joe. The Cry of Life

When a Kanegon showed up during Haruki's night shift and ate the Ultra Medals, Haruki had to tell Kanegon about the Ultra Medals for each of his forms in order to get them back before they were digested. In the process, Haruki explained his conflicted feelings to Kanegon, allowing Z to finally understand Haruki's internal turmoil. I'll Feast on Medals!

Following the battle against Grigio Raiden, the members of STORAGE had a party to celebrate King Joe STORAGE Custom's victory, with Haruki wishing he could travel back in time to eat Bako's tuna again. However, the party was interrupted by Bullton attacking. When Haruki attempted to board Windom, he kept being sent back in time due to his subconscious desire to eat the tuna again. Yoko telling Haruki what she had learned about the properties of the fourth dimension caused Haruki to try to focus on boarding Windom, but his subconscious instead sent him back in time to when his father was alive. This in turn allowed Haruki to ask his father for advice, finally restoring Haruki's to fight as one with Z while remembering the ones he was forced to kill. Transforming into Z, Haruki and Z used all three of their forms in the ensuing battle, ultimately using Beta Smash's Energy Rope to send Bullton flying before changing into Alpha Edge and finishing it off with the M78 Style Shining Tornado Slash. Four-Dimensional Capriccio

The day after, Riku contacted Haruki and asked if he had defeated any strange monsters recently. Bullton's defeat had caused the space in the area to destabilize, causing Greeza to spawn. Haruki and Riku team up once again to fight against Greeza, but their efforts were in vain, and Geed had been absorbed by the monster to trap it between reality and unreality, sealing it in its first form. He had told Haruki that a "needle" existed beyond the void, and gave Z his Ultra Medal for later use. Pondering on what they should do, Z and Haruki concluded that they needed a "power beyond logic" to defeat Greeza. With Jugglus Juggler's help, they obtained the Belial Medal from Celebro. After forcing the Belial Atrocious Medal into the Z Riser, Z achieved his newest form - Delta Rise Claw. With it, Z and Haruki save Geed and retrieve the Beliarok from inside Greeza, and used the weapon to seal Greeza away. Soon after the ordeal, Geed gave his Ultra Medals to Haruki and entrusted the Earth to him and Z before leaving. A Warrior's Duty

Because of Hebikura's decisions to defy orders from Director Kuriyama, then possessed by Celebro, STORAGE was disbanded and replaced by GAF's new robot unit SAAG, and Haruki was moved to the security department instead. D4 Individual Tomorrows After Haruki and Z extracted Yoko from Ultroid Zero's cockpit because of her getting knocked out by the D4 Ray's backlash, Jugglus Juggler revealed his true identity and motives to them. Prelude to a Nightmare Celebro, possessing Director Kuriyama, transformed into Five King while Juggler transformed into Zeppandon to fight over Ultroid Zero, with Haruki and Z joining the battle. However, due to exhaustion from a previous battle, Z was defeated and Haruki fell unconscious. Celebro threatened to kill Haruki if Juggler had not given up Ultroid Zero, causing him to relent and retreat. Celebro took this opportunity to retrieve the Belial Medal as well. When Haruki came back to his senses, he transformed to fight against Ultroid Zero, piloted by the Celebro-possessed Yoko. It evolved into Destrudos shortly after and shrugged off most of Z's attacks, before blasting him with the D4 Ray. The damage was great enough to cause Z to separate from Haruki, as his body could not handle another transformation. Haruki reawakened surrounded by his former STORAGE team members, planning to take the SAA units back to fight Destrudos. The Game to Extinction

After managing to regain control of the SAA units, Haruki and Juggler used them to fight Destrudos and were later joined by Kojiro Inaba piloting Sevenger. Using King Joe, Haruki plunged through Destrudos' chest, and somehow connected with Yoko inside, freeing her from Celebro's influence and regaining the Belial Medal. As they both fell from the sky, Haruki's resolve reached Ultraman Z and allowed him to transform once more. Fighting a difficult battle, Haruki and Z were on the edge of losing until all their fellow STORAGE members cheered them on, giving them the strength to overcome Destrudos and destroy it once and for all. After the whole ordeal, Haruki bid farewell to his friends, though he assured the rest of STORAGE that he wouldn't be gone from the planet for good, and would soon return to Earth to celebrate Bon Festival and New Years Day. Haruki then travelled into space with Z to explore the universe. Warriors Shining Beyond

Haruki reappears in Ultraman Trigger: New Generation Tiga armed with a GUTS Sparklence and his own GUTS Hyper Key.[4][5] He was in pursuit of the Alien Barossa which damaged his Z Riser and got his Z Holder stolen.

Haruki Natsukawa sets his Ultra Access Card into the Z Riser before sliding the blade and pressing on the trigger.

Transforming in this manner allows Z to possess Haruki's body and fight human-sized opponents. However, Z can only remain transformed for roughly 50 seconds as the transformation puts a heavy burden on Haruki's body.[6]

Haruki Natsukawa sets his Ultra Access Card into the Z Riser and then places three Ultra Medals in the slots before sliding the blade and pressing on the trigger. He says his signature catchphrase for each form before transforming.

The background is torn open to reveal a red one like in the opening of Ultraman, which then periodically flashes white similar to Ultraman's rise scene. It is replaced by a fiery background with Taro's ring of light appearing before changing to a blue background with streaks like Ace's rise.

Haruki places the Zero, Geed and Belial Medals next to each other, causing them to power up into the Rise Ultra Medals.

The rise background initially consists of a golden background with a blue, red, and white whirlpool of light from Zero Beyond's rise; which then switches to an inward swirl of blue light and black lightning on a red background from Geed Primitive's rise. The background then changes into the Sturm Organ's green swirls and Carellen Element-like sparkles from Belial Atrocious' transformation.

The medals power up into Rise Ultra Medals

Zero Beyond, Geed Primitive, and Belial Atrocious fly by the screen

Screen splits between blue and red, accompanied by a blue spiral of light

Like Kengo, Haruki converts the GUTS Sparklence into its Sparklence mode, loads it with the GUTS Hyper Key, and by pulling the trigger held skywards he transforms into Ultraman Z.

"Burn in Scarlet Flames, the Power of Courage! 'Kay!"

Zero Beyond, Geed Primitive, and Belial Atrocious fly by the screen

Screen splits between blue and red, accompanied by a blue spiral of light 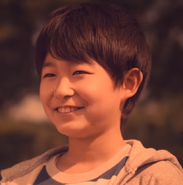 Haruki in his youth