Fireman episode 24 "The Harmonica Crying in the Night"

Harmonigan was a monster created from the vengeance of a harmonica which had been thrown away. It emerged in Yume no Shima, causing nightly noise and earthquake every evening. It managed to absorb Fireman's Fire Flash. It emits flames and heat rays from holes on the body and manipulates countless instruments like limbs. It was blown as a harmonica by Fireman until its anger died out and it returned to its normal harmonica form. 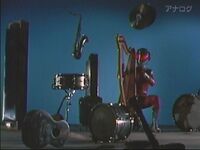 Musical Overload
Add a photo to this gallery

Add a photo to this gallery
Retrieved from "https://ultra.fandom.com/wiki/Harmonigan?oldid=511042"
Community content is available under CC-BY-SA unless otherwise noted.