Harigojira (ハリゴジラ Harigojira) is one of the many Kaiju to appear in the series, Mirrorman. Harigojira appeared while Mirrorman was fighting Snake King.

Harigojira was a monster created by the Invaders to assist Snake King when he fought Mirrorman. The spiky monster emerged from the ground, quickly pinning Mirrorman to the ground while Snake King recovered from the loss of two heads. However, a red fighter appeared to launch missiles at Harigojira, allowing the hero to finally kill Snake King with a pair of spikes that were used to pin him down. Harigojira escaped by burrowing right when Mirrorman's energy time bomb was about to go off. The monster appeared in Tokyo soon after to destroy a construction site. Mirrorman showed up to fight, but after a brief skirmish Harigojira fled once more.

Some time later Harigojira was summoned into action to aid in a squadron of saucers against Self Defense Force jet fighters and the red fighter, now named Jumbo Phoenix. Missiles were launched at it, forcing Harigojira to burrow underground. He returned once more that night, the Jumbo Phoenix quickly spotting the spiky monster and opened fire. Harigojira burrowed once more and headed for a nearby nuclear plant. Kyotaro turned into Mirrorman to fight him once again. The hero managed to out maneuver the monster, eventually using one of Harigojira's spikes to fight him with after blasting it off with the Mirror Knife. The spike was thrown when Harigojira had his back turned, his own weapon bringing him down as it impaled him in the torso. 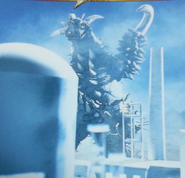