Hanzagiran was a Terrible-Monster that was being manipulated by an old man who had become bitter towards his village for being disrespectful to the environment. In retaliation, the old man crafted a flute that was used to transform the tiny salamander that was Hanzagiran into the towering monster it was, where it attacked the village, much to the sadness of the old man's daughter.

Once TAC came onto the scene, they retaliated with their weapons, but Hanzagiran's armor proved their efforts futile as Hanzagiran then sprayed at them with his acid. Luckily, the acid did not harm TAC's vehicles that much, but TAC was still forced down to continue their assult. During the battle the old man and his flute were destroyed by Hanzagiran's Acid, leaving Hanzagiran rampaging and out of control. Suddenly just as Hanzagiran was about to attack the old man's daughter, Ultraman Ace arrived to back the monster. After a relatively short battle, and Ace realizing that Hanzagiran could be tamed, Ace used the Ace Barrier to revert Hanzagiran back into a Salamander form, ending his threat. Curse of the Salamander

Although not physically seen, his soul along with Red King, Bemstar, Seagorath, Baraba, and King Crab were used to combine into Tyrant which would appear in other movies. Go Beyond the Ultra Brothers!

Hanzagiran was a combatant of the Dark Spark War who fought valiantly until it was turned into a Spark Doll by Dark Lugiel. He was first seen in the special as a Spark Doll. Hikaru Raido and his friend Chigusa Kuno found it deep in a nearby forest on a path thanks to the Ginga Spark. Alien Icarus then stole the Spark Doll from Misuzu Isurugi, then, along with Red King, King Crab, Bemstar, Baraba, and Seagorath, Alien Icarus dark lived Hanzagiran and himself to form Tyrant. After Tyrant was defeated by Hikaru as Ultraman Tiga and Tomoya Ichijouji inside Jean-Nine, all of the monsters, including Hanzagiran, were turned back into Spark Dolls and were then collected by Hikaru and his friends.

In episode 7 of Ultraman Ginga, Hanzagiran along with many other monsters are seen cheering Ginga on as he fights Dark Galberos.

Hanzagiran became a Spark Doll in the conclusion of the Dark Spark War due to the Darkness Spark's powers. His Spark Doll was found by Alien Icarus and used to re-create the Kaiju, Tyrant. Tyrant was eventually defeated by the combined efforts of Jean-Nine and Ultraman Tiga.

The first known figure of Hanzagiran was released in 2009 by Marmit. It has five points of articulation and stands at about 7-8 inches in height (including the height of the spikes). Its detail is very show-accurate, and it has two paint jobs. One of which is a white and blue paint job and is closer to the character as it's seen in the show and the other being a multi-colored "aqua" sort of palette.

In later years, a figure of Hanzagiran was released by Bandai in 2013 as part of the Ultra Monster 500 series, meant to represent the character's appearance as a Spark Doll. It has four points of articulation and has a fairly accurate paint job, although it's slightly different from the character's appearance in Ultraman Ace. The figure stands at 5 inches in height (including its spiked protrusions) and is # 31 in the series. 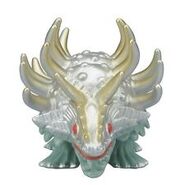 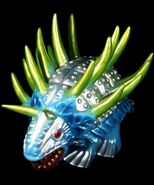 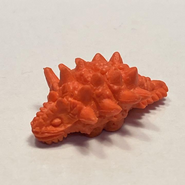 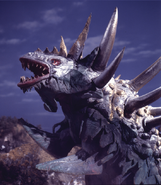