None
Halen (ヘイレン Heiren) is a Kaiju that appeared in the Ultraman Max TV series. He appeared in episode 12.

When DASH was testing their Bird Beta fighter, Halen appeared and attacked the fighter, agitated by the super sonic noises that the fighter gave off. The Kaiju later appeared at Shibuya City, drawn to the music of a new band known as "Bad Scanners" which had a similar frequency as the DASH Bird Beta. After causing destruction in Shibuya City Halen retreated before DASH could attack it. DASH member Kaito Touma concluded that Halen attack the city because of Bad Scanners music, which the Kaiju found threading due to having a frequency so close to the Bird Beta. Realizing this DASH hurried to the Bad Scanners concert to avoid Halen attacking another public area.

However DASH was unable to stop Bad Scanners from playing their music in time and Halen soon arrived at their concert. DASH tried using DASH Birds 1 and 2 against Halen but the Kaiju speed gave it the advantage. Ultraman Max then appeared, and taunted Halen in battle son that the Kaiju would forget about attacking the concert, but after Halen almost destroyed the concert building Max took the air to lead the Kaiju away. Halen was able to easily over power Max when airborne, so DASH captain Shingeru Hijikata ordered for Bad Scanner to play their music again to distract the kaiju, which gave Max enough time to charge his Maxium Cannon attack and destroy Halen. Pursuit at Supersonic Speed 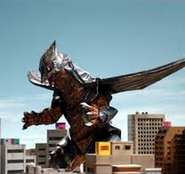 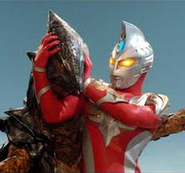 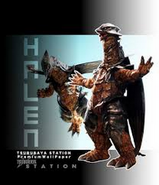