Gymaira (ギマイラ Gimaira)[1] is a Kaiju that debuted in the TV series, Ultraman 80. He first appeared in episodes 17 and 18.

Gymaira was an alien monster who came to Earth after destroying an alien spaceship in a meteorite 20 years ago, and made his living by attacking and controlling several living creatures that inhabited the Island he resided on all while hiding inside a massive cave.

During Ultraman 80's time when UGM visited the island, they noticed that several tourists were seen acting were strangely without showing any true sign of emotion, as well as having unusually red bite marks on the back of their necks. Later that night, Gymaira gathered all the tourists to his cave preparing to feed. However he noticed that UGM was in the area and unleashed the zombified tourists onto them. Luckily a woman that was connected to Lavras (one of Gymaira‘s monster slaves) was able to rescue them before fleeing without saying a word. Later on when Takeshi and UGM tried to learn about what that woman had with the monster Lavras, Gymaira called upon Daron to eliminate UGM as well as brainwashing Lavras in fight against Ultraman 80. However, Ultraman 80 defeated Daron and Lavras wandered away in pain. As punishment for his near betrayal, Gymaira pulled Lavras into his cave and tried brainwashing him fully until Lavras was as mindless as most of the tourists on the island.

Shortly afterwards, Gymaira called all of the brainwashed tourists to his cave again to feed yet again. However, UGM tried to fight back by hurling a bomb into the cave where it detonated as Gymaira was feeding. Enraged, Gymaira severed all of his control on the tourists and burst out of the mountainside to attack UGM himself. At first, the SDF tried to fight off against Gymaira, but it was to no avail as Gymaira exhaled his explosive mist, destroying everything in his sight. Takeshi tried to fight back in his own by firing at Gymaira, only to have Gymaira fire his ray at him. Luckily Takeshi quickly transformed into Ultraman 80 and did battle against the colossal beast. Gymaira however, was too big and overpowered 80 in strength, then he whipped out his long tongue and started electrocuting 80, weakening him with it. Suddenly, Lavras returned from before and quickly saved Ultraman 80 by stabbing Gymaira in the neck. This enraged Gimira even further, as he released the weakened Ultraman 80 and viciously beat down Lavras until he killed Lavras by charging his innards with electricity. After watching, horrified, Ultraman 80 gathered enough willpower to beat down Gymaira with ease. Finally, Ultraman 80 hit Gymaira with the Moonsault Kick and shortly after, Gymaira exploded into several pieces.

Reibatos, by command of Absolute Tartarus, revived Gymaira to do battle against his old enemy 80, in order to distract him from fighting Leugocyte. 80 started the battle well, but was captured and electrocuted once again by Gymaira's tongue. He was rescued out of nowhere by Ultraman Cosmos and Ultraman Justice. Now free from his grasp, 80 quickly finished off Gymaira with his Ultra Straight Flash. The Beginning

Gymaira was a Kaiju belonging to Alien Zelan Oshoro, who brought it to Earth to drain its magic power. However, it got hungry and started to drain the life energy of people as well, by staying underground and using its tongue. As a consequence, the people who Gymaira had drained had lost the ability to have dreams, since dreams were a form of magic, turning them into mindless drones that Oshoro could easily conquer.

A short time after Pagos was defeated by Ultraman Fuma, Gymaira emerged from the underground, using its split tongue in an attempt to consume more life energy from all the surrounding humans. As Taiga was still weakened from his fight with Pagos, Gymaira defeated him with ease, grabbing Taiga around the throat and causing the Ultra to cry out in pain. Taiga was defeated, and disappeared. One Afternoon When the Magic Was Lost From the Star

With his plan foiled, Oshoro brought Gymaira underground into a hidden pool in an abandoned building for it to recover. Kirisaki appeared and changed into Ultraman Tregear before knocking out Oshoro, and granted Gymaira extra energy, causing it to rampage on the surface. Luckily, Maria was able to restore Taiga's energy, allowing Hiroyuki Kudo to transform again. The two giants battled again, with the Ultra assuming Photon-Earth to challenge the monster. After a short battle, Gymaira was destroyed by Taiga using the Aurum Strium, further powered up by the water from the ocean of Planet Sarasa, which Maria unleashed. Even Then the Universe Will Still Go on Dreaming

Gymaira suddenly appeared in a city on Earth, rampaging and destroying several buildings, prompting GUTS-Select to sortie. While Himari Nanase attacked using the GUTS Falcon, Akito Hijiri, Yuna Shizuma and Kengo Manaka went to help people evacuate. Kengo then ran off and transformed into Ultraman Trigger with Akito finding out about his identity. Trigger fought a brief battle against Gymaira before knocking the monster down, then firing his Zeperion Beam into Gymaira at close range. The resultant explosion not only killed Gymaira, but blew Trigger off his feet, sending him several tens of metres through the air.Leap to the Future

Gymaira is incredibly rare. There are five different paint variants, some unusual ones are red blue and all green. 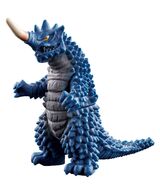 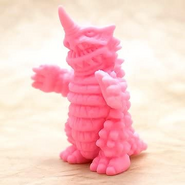 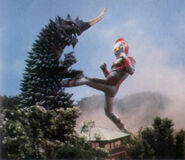 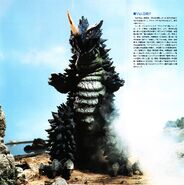 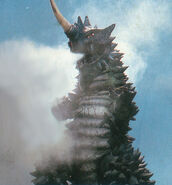